Sowing the seeds of success

Owner-breeder Chistopher Spence, a former Senior Steward of the Jockey Club, enjoyed a brace of victories with the homebred half-brothers Seedsman and Seedling at Lingfield on Tuesday. Both geldings are trained by Charles Egerton and were ridden to glory by Sam Twiston-Davies.

Seedsman, a five-year-old son of Sulamani who won an Aintree bumper on debut last May, secured his first success over hurdles in the two-mile handicap and looks set to step up to steeplechasing in the future.

An hour later the three-year-old Seedling emulated his half-brother with an impressive debut bumper success in the junior contest over a mile and five furlongs.

Spence, who owns Chieveley Manor Stud in Berkshire, has held a number of key roles within racing and breeding over the years and also served a stint as Chairman of the National Stud. Seedling is a nod to his time there as he is from the first crop of one of the stud’s resident stallions, the dual Guineas winner Cockney Rebel, for whom this was a first win by one of his offspring under National Hunt rules.

The brothers hail from a family which is rippled with plenty of winners, both on the level and over jumps. Their dam Unseeded is an Unfuwain three-parts-sister to Calendula, the dam of the Cheltenham Festival winner Son Of Flicka, and grandam Sesame won the Group 2 Blandford Stakes among her nine victories and is a half-sister to Ascot Gold Cup winner Celeric. Also in the family is the former Willie Mullins trainee and black-type hurdler Serpentaria, who won on the flat for Spence and Sir Mark Prescott before being sold to Ireland. 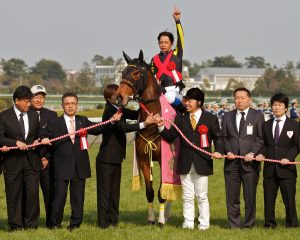 Up Next
Gentildonna gallops into the history books