Solwhit returns to rule the World

Solwhit only returned to racing on New Year’s Eve after nearly two years off the track but the nine-year-old demonstrated he retains plenty of ability with a battling victory in the Ladbrokes World Hurdle over another old warrior, Celestial Halo.

The absence of four-time winner Big Buck’s left the impression that this year’s contest was an open affair but Solwhit’s trainer Charles Byrnes was adamant that the possible return of Big Buck’s next year holds no fear for him.

“I have no doubt he’d have beaten Big Buck’s last year if he’d been here – the form of that race wasn’t that strong,” said Byrnes. “He’s nine now and we’ll try to bring him back for this race next year. He won’t go to Aintree but maybe Punchestown or the French Champion Hurdle.”

The World Hurdle was a seventh Grade 1 win for the French-bred son of Solon, who has also won the Irish Champion Hurdle and Aintree Hurdle, but a first for his mercurial rider Paul Carberry, who is nursing a sore shoulder following a fall on the opening day of the Festival.

“That was some tonic, it’s great to get a Grade 1 win here,” said Carberry, one of the most gifted jockeys of his generation. “I’m 39 now but there’s still plenty of time for more. My dad retired from race-riding at 41 so I’ll have to try to beat that.”

Davy Russell had partnered Solwhit to nine of his 13 previous victories and while his retainer with Gigginstown House Stud meant he would have been unable to ride him in the World Hurdle, Russell spent most of the day in Cheltenham General Hospital after suffering a spontaneous collapsed lung following his second ride of the day. He will now not be able to partner second favourite Sir Des Champs in Friday’s Gold Cup and a replacement is still being sought.

Russell’s absence meant that youngster Bryan Cooper came in for a couple of mouth-watering spare rides, notably on Ryanair Chase favourite First Lieutenant. However, he had to settle for second behind the Tizzards’ Cue Card, winner of the Champion Bumper in 2010 and runner-up to Sprinter Sacre in last year’s Arkle Trophy.

“He’s definitely the best I’ve ever had and the best I’ll ever have. I don’t know how I’ll ever find another one like him but I’ll keep trying,” said Colin Tizzard, who became the third trainer at this year’s Festival to witness his son ride a home-trained winner.

Bryan Cooper didn’t go home empty-handed though as he had landed the first race of the day, the Jewson Novices’ Chase, aboard the “giant-killing” Benefficient, who dispatched short-priced favourite Dynaste for trainer Tony Martin and New York-based owners Aiden Shiels and Niall Reilly.

There was some respite for the bookmakers on Thursday, with Benefficient winning at 20/1, Jonjo O’Neill’s Holywell taking the Pertemps Final at odds of 25/1 and the Venetia Williams-trained Carrickboy winning the Byrne Group Plate at 50/1.

The victory of Same Difference in the Fulke Walwyn Kim Muir Challenge Cup under Festival first-timer Ryan Hatch brought up a double for the week for Nigel Twiston-Davies’s local stable. Having trailed their Irish counterparts during the first two days of the Festival, the English-based trainers drew level by the end of day three, with the two nations on ten wins apiece.

Thursday’s action was marred by a fatal injury to the David Pipe-trained Matuhi, who was in contention in the Byrne Group Plate when falling at the last, and a serious injury to leading amateur rider JT McNamara, who was airlifted from the course to Frenchay Hospital in Bristol where he has been placed in an induced coma. 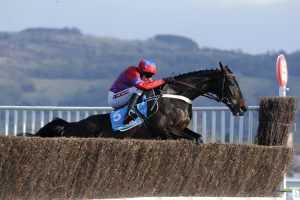 Up Next
Sprinter Sacre simply superb