Life Happened tops first day at $750,000 as Kentucky is hit by the big freeze

The 2014 sales season is underway in Lexington, where the dual graded stakes producer Life Happened led the first session of the Keeneland Jaunary Horses of All Ages Sale when selling for $750,000 to Jason Litt of the Solis/Litt partnership.

Despite extreme cold weather in Kentucky, with the mercury plummeting as low as -25F for the new year auction, plenty of hardy sales folk braved the elements to lend a vibrancy to the first of four days of trade at Keeneland. The session-topping daughter of Stravinsky was offered in foal to Harlan’s Holiday – who died in Argentina in November – and she already has three black-type offspring to her name. Her four-year-old Vyjack, by Harlan’s Holiday’s son Into Mischief, won the Grade 2 Jerome Handicap and Grade 3 Gotham Stakes last year, while his year-younger Bernardini half-sister Tepin landed the Grade 3 Delta Princess Stakes. The 13-year-old Life Happened is to join the fledgling broodmare band of LNJ Foxwoods and will remain in Kentucky.

Heading farther afield is Grade 1 winner Unbridled Belle, who was a $400,000 purchase for Haruya Yoshida of Oiwake Farm in Japan and was sold with a March cover by Bernardini.

Bred in Kentucky, the six-year-old raced initially in France, winning at Cagnes-sur-Mer at three when trained by Jean-Claude Rouget before going on to land the Grade 3 Frances A Genter Stakes on her US debut. She was sold carrying to Claiborne Stud’s Arch, having produced her first foal, a filly by Flotilla’s sire Mizzen Mast, last year.

Top of the ‘short’ yearlings offered on the first day was a colt by sire-of-the-moment Kitten’s Joy out of the Storm Cat mare Gata Bella, the dam of stakes winner Ha Ha Tonka. The April-foaled youngster, offered by Noel Murphy’s Castle Park Farm, brought a bid of $235,000 from Philip Blake.

“There was good competitive bidding throughout, especially on yearlings,” commented Geoffrey Russell, Keeneland’s Director of Sales. “The median went up and the number of horses that weren’t sold went down, which indicates the professionalism of the consignors who are participating in the January Sale. They adapt to the market, understand the market very well and they identify the market within sales.”

The second part of January Book 1 commences at 10am local time on Tuesday. 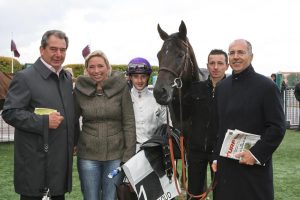 Up Next
Masterful start by young Coolmore sire