A satisfactory renewal of the Arqana August Sale drew to a close in Deauville on Monday with a level of trade that wound up not too far off the levels achieved in the pre-pandemic era of 2019.

At the end of the sale, Eric Hoyeau, President of Arqana, and Freddy Powell, Executive Director, commented: “The sale remained very international today and the percentage of horses sold was solid, which made the average slip a little compared to 2019. Over the three days as a whole, the results were pleasing. The context was still uncertain when the catalogue was released and it is a relief to see that this edition is in line with the August Sales that we have held previously, just behind the exceptional year of 2019.

“This is only the third time the turnover has exceeded €40 million and the number of horses sold for €200,000 or more is the same as in 2018. We were fortunate to experience a sale in a near-normal atmosphere. We would like to thank our buyers once again who were active on site and remotely, as well as our vendors for having brought yearlings of this quality to the ring. ”

The €2.4 million filly was knocked down to agent Charlie Gordon-Watson on behalf of an undisclosed client who plans to send the new acquisition to Andre Fabre. Out of the Galileo mare Typique, a member of the Niarchos’ outstanding Coup De Folie family, she was bred by Haras Voltaire and sold by Haras d’Etreham. 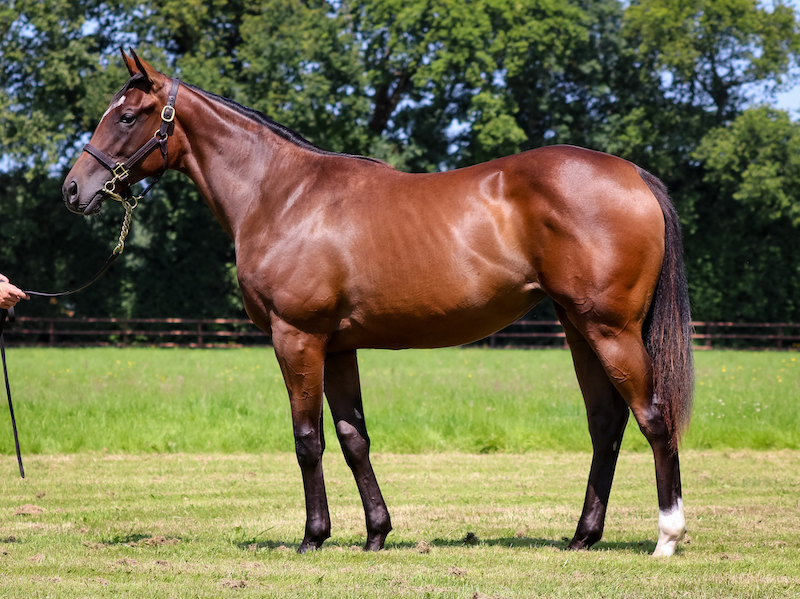 The million euro mark was also breached by a Siyouni half-brother to recent Vintage Stakes winner Angel Bleu, for whom Oliver St Lawrence paid €1.5 million on behalf of Fawzi Nass. He was bred by Pan Sutong out of Cercle De La Vie, a Galileo sister to Highland Reel and Idaho, and was the highlight of another excellent sale for the auction’s perennial leading vendor Ecurie des Monceaux.

Monceaux sold 33 yearlings this time around for a total of €9,062,000 to ensure they retained their place as the sale’s top consignor for the tenth consecutive time, on this occasion ahead of Haras d’Etreham on €5,085,000.

Oliver St Lawrence was the sale’s leading buyer as the purchaser of six yearlings worth €3,420,000. Godolphin also came away with six yearlings, in their instance worth a total of €3,220,000.

Also of interest was the number of American-based buyers to make a play. Arqana made a concerted effort to attract such buyers to the sale, going as far as to organise a jet out of Saratoga to Deauville, and were rewarded for their efforts as the likes of Jack Wolf, Craig Bernick, Lindsay Laroche of Highland Yard, pinhooker Kirkwood Stables and trainer Kenny McPeek made purchases; the latter was particularly active on Monday as the purchaser of four yearlings for a total of €355,000.

Monday’s trade was headed by a daughter of the popular young sire New Bay, who was sold for €320,000 to John and Thady Gosden. The filly was offered by her breeder Gestut Ammerland and is a member of one of their most successful families as a daughter of Borgia’s Best, a King’s Best mare out of its Deutsches Derby heroine Borgia. 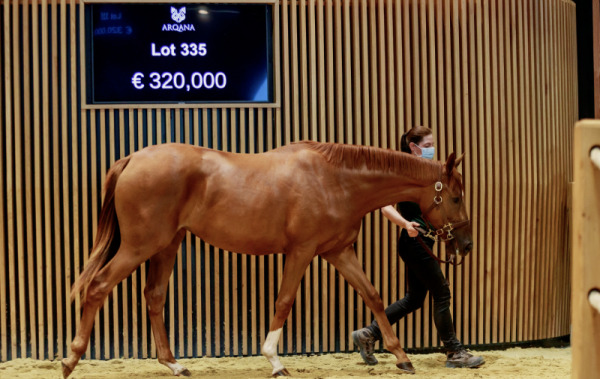 As the session entered its final minutes, agent Arthur Hoyeau served up another highlight by going to €270,000 for a second-crop daughter of Caravaggio.

A half-sister to Listed winner Yuman and out of the Diktat mare Dianaba, she was sold by Haras des Granges.

“She was the filly we wanted,” said Hoyeau. “Caravaggio is a good stallion who is siring precocious horses and her dam has produced some good horses. I bought her for an association and she will go to training with Christophe Ferland.”

Trade for much of the day was led by a Wootton Basset colt knocked down to the BBA Ireland for €210,000 out of the JK Thoroughbreds draft.

Part of a sizeable draft belonging to his sire that ultimately averaged €154,188 for 16 sold, the colt is out of dual winner Fray, a Juddmonte-bred Oasis Dream daughter of the high-class performer Short Dance. 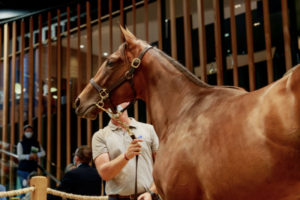 Up Next
€2.4 million for Dubawi filly during robust evening of Arqana trade