Gittus steps up to the Plate
Stories

Peter and Lyn Snowden at Newmarket

Over and above the two Australian jockeys who rode in the Darley July Cup (Steven Arnold and Hugh Bowman), there were plenty of Aussies among the spectators at Newmarket’s July Course last Saturday. These included Sheikh Mohammed’s trainer Peter Snowden and his wife Lyn.

With the Australian racing season about to conclude, Snowden is lying second to Chris Waller in the Sydney trainers’ table, but he has achieved the unique feat of sending out the winner of every Group 1 two-year-old race in Australia this term. The winning colts were Sepoy (Golden Slipper and Blue Diamond), Helmet (Champagne Stakes and AJC Sires’ Produce Stakes) and Benfica (The T J Smith Stakes).

July Week in Newmarket is one of the busiest weeks of the year in British racing’s ‘HQ’, with a top-class race meeting tied in with Tattersalls’ July Sale and open days at various studs. For many years now, the July Cup has been one of Darley’s biggest sponsorships, and the occasion consequently tends to see a gathering of the Darley clan, with Sheikh Mohammed invariably having the week inked into his diary.

Snowden duly took the chance to head up to the UK for a few days, to catch up with the Sheikh and key members of Darley’s European division, and to inspect Sheikh Mohammed’s stables in Newmarket and his nearby Dalham Hall Stud.
Snowden explained: “This is our second visit to Newmarket and we’re loving it. We first came over three years ago, not long after I’d taken the job with Sheikh Mohammed. It’s a great place to visit, not only because Newmarket is the historic home of horseracing, but also because it’s such a beautiful place.

“It’s always good to travel, particularly now that racing has become so international. The Darley July Cup is a perfect example: three Australian horses in the field, all trained in different countries. I was looking up the record of one of them, War Artist – he’s been everywhere!” 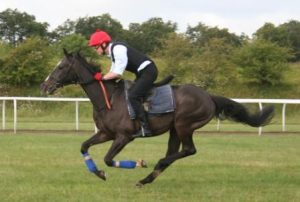 Up Next
Gittus steps up to the Plate