Rockcliffe Stud had plenty to cheer about on Friday when homebred Snow Lantern motored home to collar Alcohol Free and 1,000 Guineas heroine Mother Earth in the Group 1 Falmouth Stakes at Newmarket.

It was a performance that avenged the defeat of the filly’s dam, QIPCO 1,000 Guineas heroine Sky Lantern, who was carried across the track by Elusive Kate in the 2013 and ultimately finished second.

The question for Snow Lantern on Friday was whether she could overturn her defeat by Alcohol Free in last month’s Coronation Stakes at Royal Ascot, where she had only finished one and a half lengths down to Jeff Smith’s charge.

She answered that spectacularly when switched out from behind a wall of horses up against the far side rail to the middle of the track by jockey Sean Levey. Once finding daylight, she produced a stunning turn of foot to beat Mother Earth half a length with a neck back to Alcohol Free in third.

“We went to York to try to bag one of those [stakes races] and it didn’t work out, but she’s learnt to settle since then.

In our June 2021 edition, Julian Muscat spoke to the Keswick family about the multi-generational success they’re attempting to achieve

“We’ll sit down and have a think, but I do think she’ll get a mile and a quarter. She’s in the Nassau and the Sussex, so we’ll look at Goodwood and I’d probably be leaning towards the fillies’ race [Nassau]. She’s in the Juddmonte International as well, but I’m very hopeful she’ll stay in training next year, so I’m happy to give her a nice time.”

Also at Newmarket on Friday, Kirsten Rausing’s homebred Sandrine followed up her success in the Albany Stakes at Royal Ascot last week with a commanding win the Group 2 Duchess Of Cambridge Stakes.

Winning trainer Andrew Balding, also speaking to Racing TV, said: “That was very good. She got a little bit lonely in front, I think, but she’s got a lot of ability, which is exciting. She’s so relaxed, which I hope bodes well for her chances of staying a mile next year.

“She’s got physical scope – she’s not a compact, two-year-old type. She’s got a bit more length and depth to her, I think. Hopefully she’ll make up into a nice three-year-old.

“It’s good she’s proved Royal Ascot wasn’t a fluke. There was a little bit of nerves going into this as she’d looked so good at Ascot and it’s nice to see that confirmed on different going today.” 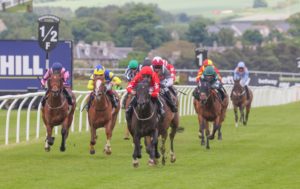