Smith on top in Classic

Hall of fame inductee Mike Smith was once again on top of the world as Arrogate lived up to his reputation by scorching through to land the $6 million Breeders’ Cup Classic at Santa Anita.

The 51-year-old veteran rider only 24 hours earlier was involved in a titanic duel in the Breeders’ Cup Distaff on runner-up Songbird. This time he was to enjoy better luck.

Dubai World Cup-winner and favourite California Chrome jumped to the lead as expected under Victor Espinoza. Not overly pressured, he was tracked by Melatonin with Arrogate in the Juddmonte silks settling into third from the widest draw.

As they swung around the far turn, California Chrome looked to be travelling easily but Arrogate under a drive went second on the inner looking to chase down his arch rival.

Drawing clear of the others, Arrogate bore down just a length behind into the final two furlongs and picked up strongly in the final 100m to go past the favourite, claiming the prize by half-a-length.

For Smith, his superb record at the Breeders’ Cup meeting goes on, now standing at an impressive 25 wins. He also becomes all time leading jockey in the Classic, his previous three coming with Skip Away in the late 90’s, the incomparable Zenyatta in 2009, and most recently Drosselmeyer in 2011.

“This horse has such stamina for such a young three-year-old, he’s just relentless,” reflected Smith. “He’s not used to these huge crowds and everything but what a talent.”

Khalid Abdullah’s Juddmonte Farm silks had yet to taste success in the Breeders’ Cup Classic, but Bob Baffert’s three-year-old son of Unbridled’s Song makes it a first in that regard.

Trainer Bob Baffert continues to covet the mile and a quarter contest as his own, having taken the last three runnings the most recent 12 months ago with Triple Crown winner American Pharoah.

Baffert said: “I thought there was no chance turning for home he could catch Chrome. It takes a lot to get me excited it was some race.”

Earlier in the afternoon, the Ballydoyle team struck gold in the Longines Breeders’ Cup Turf courtesy of Highland Reel.

Under Seamie Heffernan, the four-year-old son of Galileo made all of the running securing a diminishing length and three quarter advantage over Flintshire and stable mate Found, who made good progress from the rear.

There was a strong European challenge in the Breeders’ Cup Mile, headed by Henry Candy’s Limato. A strongly-run affair, the William Mott-trained Tourist took the inside route and held off the late thrust of Royal Ascot winner Tepin by half-a-length. 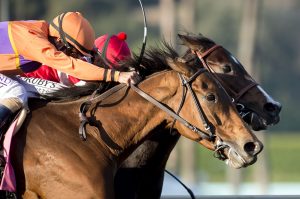 Up Next
Breeders' trio for Beholder