If French national pride runs high on Bastille Day, it must surely have been running particularly high among the French bloodstock community on July 14 this year.

The rearrangements which were made to France’s Classic programme in 2005 saw the Grand Prix de Paris have its distance changed to 2400m and its date changed to Bastille Day – and since then it has provided a series of high-class races.

Slickly at home at Haras du Logis in Normandy

This year’s running must have been particularly special in a country whose biggest races are often won by imported sons of overseas-based sires: the winner Meandre is a French-bred who acts as a galloping advertisement for a wide range of French stallions.

Grand Prix de Paris winner Meandre, a highly progressive colt who had never previously contested a Group race, is a son of Haras du Logis resident Slickly. The Darley-owned stallion was leading the table of French sires – for prize-money, individual winners and races won – even before this mighty triumph.

A grey son of France’s former champion sire Linamix, Slickly won Group races for five consecutive seasons in a career which saw him spend his early days racing from Andre Fabre’s stable in the colours of his breeder the late Jean-Luc Lagardere (for whom he won the Grand Prix de Paris, which was run over 2000m at the time, in 1999) and his final three seasons racing for Godolphin.

Meandre’s dam Penne is by the unraced Haras du Quesnay resident Sevres Rose, who retired to stud on the basis of his pedigree and who has done well from what were initially extremely limited opportunities.

Sevres Rose is related to many of the best horses to have carried the colours of his breeders the Rothschild family, who also bred and own Meandre. A son of Caerleon, Sevres Rose is from the 1988 Prix Vermeille winner Indian Rose, a half-sister to the 1982 Grand Prix de Paris winner Le Nain Jaune and the 1993 Prix Ganay winner Vert Amande. The last-named was a son of the multiple French champion sire Kenmare, and he too finds a place in Meandre’s pedigree, being sire of his grand-dam Une Pensee. 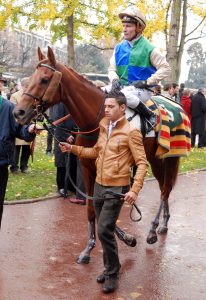 Up Next
Kauto story set to run and run