Conselice, trained by Italian champion trainer Stefano Botti, recorded the second quickest time in the race’s history. Her dam Dictatrix, from the family of Group 2-placed sprinter Blue Goblin, is owned by breeder Jackie Penny, who used to ride out for the likes of Bob Buckler, Martin Tate and Richard Barber.

Showcasing’s excellent start to the campaign follows a season that saw him become the leading British sire of two-year-olds and leading British second crop sire. As a result his stud fee, which started at £5,000, now stands at £25,000.

In a racing career cut short by a hock injury, his highlight came at two in the Group 2 Gimcrack Stakes at York. With only three runs as a three-year-old, it might have appeared the colt did not train on. Yet the hock injury that bothered him on his last two outings prompted his retirement and subsequent move to Whitsbury.

While developing a reputation as an excellent source of two-year-old winners, this season is proving that Showcasing is not just about speedy, precocious juveniles. Ed Harper, Stud Director at Whitsbury Manor Stud, is pleased by how things have turned out for the stallion so far this year.

“People were saying he’s just going to be a brilliant sire of two-year-olds, but this year he’s already had four stakes-winning three-year-olds.

“He’s proved a lot of people wrong in his short life already.”

Harper hopes that as the quality of Showcasing’s mares improves, it will help to produce more colts and fillies able to stay further than sprint trips.

He said: “It’s very encouraging. We’ve got 14–15 Showcasing foals bred off the first year of the hike in fee. They look really nice individuals, probably as nice physically as we’ve had.”

The son of Oasis Dream has covered 125 mares so far this year, a total that Harper and his team believe to be a sensible limit.

Harper explained: “It benefits the breeders because there’s not a flood into the market, it keeps a certain amount of rarity, value and exclusiveness but also looks after the stallion so that he’s not over-doing it.”

Harper continued: “Quite a few people were disappointed not getting into him but it’s a nice problem to have to manage.”

Showcasing’s progeny are not just claiming stakes honours in Europe but are also making their mark in Australia, New Zealand and the United States. Prize Exhibit, a four-year-old filly trained by James Cassidy in Southern California, has won two Grade 2s, including the Monrovia Stakes at Santa Anita earlier this year.

Next week at Royal Ascot, there is a good chance of more big-race success. Full Intention and Savannah’s Dream are both entered in the Listed Windsor Castle Stakes, with the latter also engaged in the Group 2 Queen Mary Stakes.

Two of the biggest hopes come in the shape of Quiet Reflection and Tasleet in the Group 1 Commonwealth Cup on Friday.

Quiet Reflection is trained by Karl Burke, who also handled another of Showcasing’s highly-rated performers, Toocoolforschool, winner of the Group 2 Mill Reef Stakes in his two-year-old campaign. Tasleet, in the care of William Haggas, has not been seen since his Greenham triumph.

Harper and the Whitsbury team will be hoping one of them can provide Showcasing with his first Group 1 winner as a stallion. 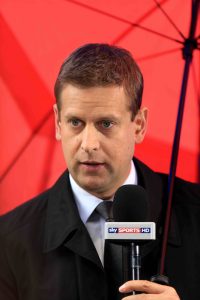 Up Next
'Presenting racing is my dream job'