Sizing steps up in style

County Kildare-handler Jessica Harrington etched her name for the first time onto the Stan James Irish Gold Cup, as her seven-year-old gelding Sizing John held too many guns for his rivals in a stirring finish to the Grade 1 feature.

Stepping up to three miles for the first time, Sizing John jumped off in midfield under Robbie Power, while two of the Gigginstown runners Don Poli and Road To Riches set a steady early pace.

The seven runners were depleted after the Jonjo O’Neill-trained Minella Rocco unseated Aidan Coleman after the fifth flight.

As the race began in earnest on the turn in, there was little to separate the remain six runners, with Carlingford Lough, the winner of the race for the last two years also closing up under Barry Geraghty.

Coming to the last Sizing John ranged up alongside Don Poli and jumped ahead, with Empire Of Dirt in close contention to the far side.

Sizing John kept finding and although pursued by the Gigginstown pair held them at bay by just under a length at the winning post.

“I thought Gigginstown would have tried to stretch my stamina a bit more, we went very steady early on,” reflected Power.

“It’s turned into a bit of a sprint which played to my strengths. I was cantering at all stages, I was in the perfect position turning in and was definitely on the horse with the most toe.”

The son of Midnight Legend had so far come up against Douvan on seven occasions, each time faring second best. He made a step up to two miles and a half on his most recent outing at Thurles when running out a convincing winner of the Grade 3 Kinloch Brae Chase.

Harrington said: “It’s fantastic having a horse like that for Alan and Ann and it’s fantastic that he stepped up to the three miles and stayed it and jumped brilliantly.

“I kept thinking now he’s gone into territory that he’s never been in, once he’d gone over two-and-a-half miles I was thinking what’s going to happen now but anyway he saw it out really well.”

Earlier in the afternoon, Davy Russell brought up his half century for the season when partnering Mega Fortune to success in the Grade 1 Spring Juvenile Hurdle.

The son of Soldier Of Fortune, one of two runners in the race for trainer Gordon Elliott, drew clear on the home turn with the Willie Mullins-trained Baupaume.

He took up the advantage on the run to the last and kept on well to claim the two mile contest by three-and-a-half lengths.

It was a one-two for the Mullins stable half-an-hour later in the Grade 1 Deloitte Novice Hurdle, as Barcadys got up to land the prize under Patrick Mullins.

Held up in the last pair, the gelding came through with a strong challenge up the inner of stable mate Bunk Off Early after the last, getting up to score by just under a length. 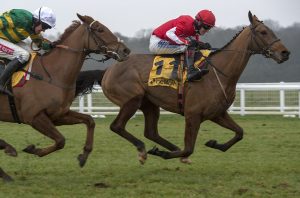 Up Next
Betfair gold for Ballyandy