Fully appreciating the extraordinary interest in Frankel, Juddmonte Farms have been incredibly forthcoming regarding news of the world champion ever since his retirement to Banstead Manor Stud at the end of 2012.

A new high was set on Wednesday when the organisation released footage of the multiple Group 1 winner Midday foaling a Frankel filly at the farm in Newmarket on Saturday, February 1. Within minutes of its release via social media, the film on YouTube had been watched and shared by racing fans around the world.

Like Frankel, Midday was trained in Newmarket by Sir Henry Cecil and was looked after by Shane Fetherstonhaugh, who was also Frankel’s daily exercise rider. Six of her nine victories came at Group 1 level, including three consecutive victories in the Nassau Stakes at Glorious Goodwood.

The daughter of Oasis Dream was retired at the end of 2011 and gave birth to her first foal, a bay colt by Frankel’s sire Galileo, on January 16 last year. 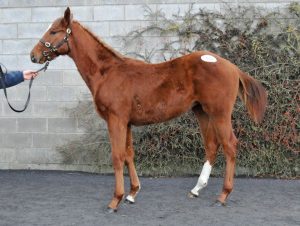 Up Next
Tattersalls Ireland cheered by returns