East Sussex-based Jim Best has been banned from the training ranks for six months after being found guilty of telling his rider to stop two horses last December.

Best was found in breach of the same charges by an independent disciplinary panel led by Matthew Lohn back in February. However, that decision was subsequently quashed owing to two issues, one related to biasness surrounding Mr Lohn and the other being insufficient reasons given.

The re-hearing held by a BHA disciplinary panel yesterday, reached the same verdict stating that Best had breached Rule (C)45 on two counts and Rule (A)30 on one.

Echo Bravo and Missile Man were the horses in question, each of which were subject to a stewards inquiry following their races and both were ridden by the yard’s conditional jockey Paul John.

John would later admit that he had intentionally not ridden the horses on their merits and had done so on the instructions of Mr Best. The panel stated that this was done with the intention of reducing each horses handicap marks.

“We find that Mr John did intentionally ride both horses other than on their merits: that is, these were ‘stopping’ rides. We also find that it is overwhelmingly likely that he rode in that
way because those were Mr Best’s instructions,” said Sir William Gage, chairman of the disciplinary panel.

He added: “That being so, the findings against Mr Best under Rule (C) 45 in respect of both races necessarily follows because he did not give his jockey proper instructions. That leaves the
issue of the alleged breach of Rule (A) 30.1 which alleges Mr Best is guilty of conduct prejudicial to horse-racing.”

The Grandstand Stables handler has seen the numbers in his yard dwindle from 32 to 13 over the last year, as owners moved their horses elsewhere.

Part of a dual-purpose operation, Best has only saddled eight winners under both codes throughout the whole of 2016.

Best said: “I still maintain that I haven’t done anything wrong.

“It’s disappointing to get any ban. But I just want it to be over, it’s been such a strain on my family and everything.”

He will now have seven days to consider an appeal before the six-month ban comes into effect. 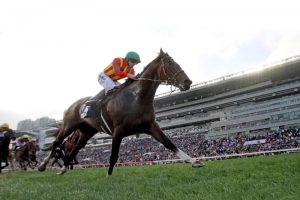 Up Next
Maurice bows out with Cup win