Celestial Path ‘would love firm ground’ at Newmarket on May 2

Trainer Sir Mark Prescott will bid to break his British Classic duck in the 2,000 Guineas with lightly-raced colt Celestial Path.

The son of Footstepsinthesand captured his first two starts as a juvenile, following up his York maiden success with an easy Listed win at Haydock, before running a fine third behind Elm Park and Aloft in the Group 1 Racing Post Trophy at Doncaster on unsuitably soft ground.

Celestial Path, who is owned by Gordon Woodall and jumps enthusiast Caroline Tisdall, will be trying to emulate his sire, winner of the 2,000 Guineas in 2005 on his seasonal debut.

Prescott, who is famed for his ability with handicappers, sent out Confidential Lady to chase home Speciosa in the 2006 1,000 Guineas before landing the Prix de Diane (French Oaks) at Chantilly.

He said: “Celestial Path works very well. Although he probably wouldn’t quite be up to it unless the 2,000 Guineas is not as good [a renewal] as it should be.

“I believe he is entitled to run. He won’t need a prep race and he would love firm ground.

“Mr Woodall is 84 and has had only one horse before – he has sold half of it, so he is already out of trouble. We can afford to be brave and we both share a dream in that we’d like to win the 2,000 Guineas.”

Celestial Path is a general 33-1 chance for the Newmarket Classic on May 2. Gleneagles, trained by Aidan O’Brien, is the 3-1 favourite. 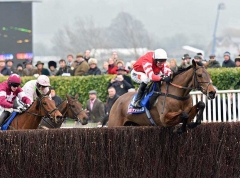 Up Next
Coneygree delivers fairytale in Gold Cup