A competitive renewal of the Listed Sidney Banks Memorial Novices’ Hurdle produced an exhilarating finish which saw Keeper Hill battle back to take the £17,000 first prize on a crisp Thursday afternoon at Huntingdon.

All eyes were on Alan King’s Challow Hurdle winner Messire Des Obeaux, whose Grade 1 penalty meant he had to concede 8lbs to his rivals.

With the race heating up down the back straight for the last time, Gavin Sheehan soon applied pressure to his mount Keeper Hill, with the odds-on favourite a half-length away in third.

Warren Greatrex’s charge hit the front before two out but was strongly challenged by Messire Des Obeaux and Tommy Rapper.

Although finding himself a length down in third after the last, Keeper Hill rallied strongly on the far side and got up to wrestle the victory from the favourite by a neck.

“It’s one of those situations where basically he’s done everything wrong and has won which is great,” said Greatrex. “We’ve always really liked him, he’s still very raw and still quite babyish but he’s improving fast.”

A son of Westerner, Keeper Hill sports the famous McNeill Family silks which have been worn by the likes of Triumph Hurdle winner Grumeti and Greatwood Hurdle hero Olofi.

Their improving gelding now makes it four wins from just six lifetime starts, with this contest over just shy of two-and-a-half miles his best to date. He ran out a comfortable winner in his two previous starts in novice hurdle events at Bangor and Hereford and is highly regarded by his Lambourn handler.

Greatrex added: “I think he would be better in a better race. You can then drop him in take your time and ride a proper race, today we wanted to make everyone honest and keep out of trouble really.

“He has this thing, going to two out he went to the front pricks his ears and makes a mistake enough to stop many horses but he still comes back fighting.

“I’ll speak to Max and everyone else that’s involved and we’ll go from there but whether it’s Cheltenham or not I’m not sure. I think he would cope with it ok but whether it’s the right thing for him at the moment I’m not sure whether we look at Aintree or something else. He’s a really exciting horse, he’s got a huge future.”

Although Cheltenham is an unlikely target, he is a general price of 16/1 with the bookies for the Neptune Investment Management Novices’ Hurdle. 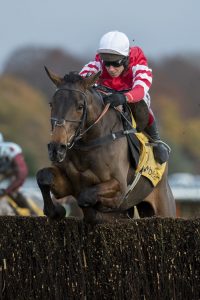 Up Next
Spring likely for Coneygree return