Plenty has been written about the retirement of the English-born dual Arc-winning trainer John Hammond at the end of last year following a career that lasted over three decades.

Less is known about the man who has taken over the licence at Hammond’s historic Chantilly yard, Hiroo Shimizu. This 38-year-old became the second Japanese national to take out a French training licence late in 2017.

The first was another former Hammond employee, Satoshi Kobayashi, who also worked for both Mikel Delzangles and Richard Gibson before he branched out on his own at premises in Lamorlaye, around the corner from Chantilly, in 2008.

After a slow start Kobayashi has averaged 14 winners per annum over the past five seasons, and of late has been involved in some marquee races thanks to the Lope de Vega filly Tosen Gift, a dual winner at Listed level and also placed five times in Pattern company.

Like Kobayashi, Shimizu has no family background in the industry, which may have been a contributory factor to the two of them being forced to venture to Europe to make a career out of their passion for racing.

Shimizu has been a French resident for most of the last dozen years – though he did enjoy one season in Newmarket with Luca Cumani – and the bulk of his apprenticeship was served there with Fabrice Chappet.

His first full campaign after going it alone was a successful one, featuring nine victories from 81 runners and a classy standard-bearer in the shape of the four-year-old filly Endorphine, runner-up in the Group 3 Prix Belle de Nuit in late October.

Now he has transferred his 30-strong string to the 8 Chemin des Aigles stable where Suave Dancer and Montjeu were housed prior to landing Longchamp’s most famous race back in the 1990s.

“John Hammond still lives across the road and comes to see me nearly every day, he has been really helpful,” admits Shimizu in English which, though some way from word perfect, is a million miles better than this writer’s Japanese.

“I have inherited his farewell winner, Nisreen [beaten a short-head in a Meydan Group 2 on January 16], while Endorphine stays in training and is being aimed at the Gold Cup at Ascot.

“Yomogi [placed in Group 3 company] and Fee Historique [sixth in October’s Prix Marcel Boussac] could both make up into Classic fillies.” 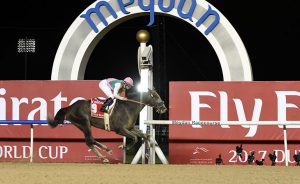