We know that one can’t please all the people all the time, so it’s no surprise that the Shergar Cup has its detractors. However, there is no disputing that it is a good show – and a popular one, too. This year’s King George VI & Queen Elizabeth Stakes was a truly vintage edition and was run a week early so that it wouldn’t clash with the Olympics, yet it still attracted a crowd smaller than that (just over 30,000) which attended Ascot on Shergar Cup Day, despite the latter coinciding with the penultimate day of Olympic action.

Furthermore, it wasn’t just the crowd who enjoyed the Shergar Cup action: all the jockeys really seemed to get into the spirit of the occasion too. The winning jockeys (Kieren Fallon and James Doyle for Britain and Ireland, Andreas Suborics and Cristian Demuro for Europe, and Aaron Gryder and Matthew Chadwick for the rest of the world) naturally found it easy to smile, but the female jockeys (Hayley Turner, Emma-Jayne Wilson and Chantal Sutherland) seemed at least as swept up by the occasion.

However, there could have been an unfortunate sting in the tail for Sutherland, which might have left her ruing rather than savouring her participation: she picked up a four-day whip ban which initially seemed set to rule her out of partnering the best horse she rides, Game On Dude, in the Pacific Classic, the highlight of the current Del Mar summer meeting.

Sutherland has already won the biggest race at both Santa Anita (the Santa Anita Handicap) and Hollywood Park (the Hollywood Gold Cup) on Game On Dude as well as finishing a close second in last year’s Breeders’ Cup Classic on the son of Awesome Again, so to miss the opportunity to post a similar feat at California’s other principal racecourse would have been very hard to swallow.

Happily, however, it appears as if the popular Canadian-born rider will still be able to take the mount because, as she explained before heading home: “In the US we can always defer a suspension for a Grade 1.”

How this is possible in this instance (bearing in mind that this suspension was not given by an American turf authority and that America, like Britain, is a signatory to the convention by which racing authorities agree to honour suspensions handed out by their foreign counterparts) is not clear, but let’s hope that this is indeed the case, because the Shergar Cup was too good an occasion for a sour after-taste to be an appropriate post-script. 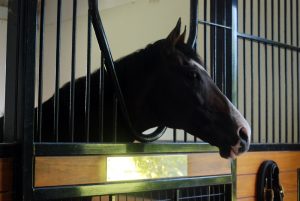 Up Next
Carnegie dies at 21