It was in the colours of Michael Bell’s assistant trainer and son Nick that the son of Prince Of Lir broke the all-aged track record at the seaside venue. The Lir Jet had been sourced by Robson Aguiar for £8,000 at last year’s Goffs UK Premier Yearling Sale.

David Redvers, Racing Manager for Qatar Racing, told the Racing Post: “Sheikh Fahad is always on the lookout for the right horse and watched The Lir Jet win at Yarmouth and liked what he saw.

“Hopefully, we’ll see that blistering turn of foot in the Norfolk Stakes next Friday. He looks a strong individual and looks a ready-made Royal Ascot runner.”

Michael Bell, speaking to the Racing Post, added: “It’s great that Sheikh Fahad has stepped in for The Lir Jet and he’s a great friend who I’ve trained successfully for before. We have a great working relationship and hopefully we can do so again.”

The Lir Jet will now be bidding to emulate his sire, who took the 2016 edition of the Group 2 5f contest on his second start for trainer Robert Cowell and The Cool Silk Partnership. 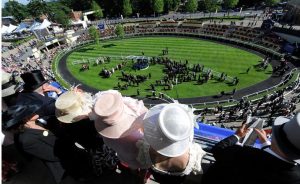 Up Next
Royal Ascot to use real-time weather data