By The Owner Breeder staff 26 September 2011 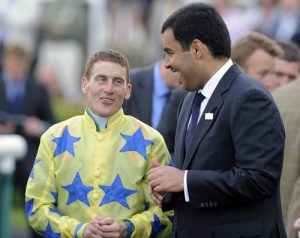 Possibly only a winner on QIPCO British Champions’ Day could top the feeling on Saturday for Sheikh Fahad Al Thani, who witnessed Lightening Pearl provide him with his first Group 1 success as an owner in the Cheveley Park Stakes.

The young Qatari sheikh has quickly become an influential force in both racing and breeding in Britain. His string of horses in training now numbers 45, while he is the owner of new stallion Makfi and has purchased interests in several potential stallions, including Harbour Watch and Strong Suit.

He has also been steadily compiling a broodmare band, aided by his advisor David Redvers, who went to 1.3 million guineas to secure the top lot, Diary (Green Desert), at last year’s December Sale at Tattersalls.

“I am delighted, I couldn’t be happier,” said Sheikh Fahad at Newmarket. “It is my second year in the game and I have a Group 1 winner. She is the only one that we bought at Goffs last year and she has turned out to be a Group 1 filly. We try to go for quality, not quantity.”

Lightening Pearl’s trainer Ger Lyons was also celebrating his first win at the highest level and is now consigning the filly to winter quarters ahead of a bid for next year’s QIPCO 1,000 Guineas.

He said: “If we are still alive, then the 1,000 Guineas would be the plan. It’s great for Sheikh Fahad – we trained his first winner and now his first Group 1. He deserves this and the game needs people like him.”

Along with his brothers, Sheikh Fahad has been a significant supporter of British racing this year via the family’s QIPCO operation’s sponsorship of the British Champions’ Series, which culminates on Champions’ Day at Ascot on October 15.

The Cheveley Park Stakes result was also a major boost for Lady O’Reilly’s Castlemartin Stud, which bred the winner and offers her Elusive City half-sister (lot 114) at Goffs’ three-day Orby Sale, which starts on Tuesday. 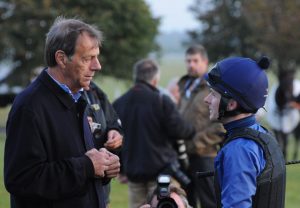 Up Next
Cecil's Champions' Day team on course