WellChild is new partner of the Cheltenham Festival
Stories

Sheikh Hamdan’s Shadwell Stud is to cut its ties with Australia, the operation announced on Thursday evening.

According to a release issued by Shadwell Stud, the Thoroughbred holdings belonging to Shadwell Stud Australasia Ltd will be dispersed at auction over the next few months; the entire Australian yearling crop will be offered at public auction at the various upcoming sales, with the cream of them going to the Inglis Australian Easter Yearling Sale, and the breeding stock will be sold at the Magic Millions Breeding Stock Sale at the end of May. The horses in training will gradually be dispersed in due course.

The announcement marks an end to a successful association between Shadwell and Australian racing that began 36 years ago with the triumph of At Talaq in the Melbourne Cup.

Shadwell’s racing manager Angus Gold stated that the decision has been taken in light of Sheikh Hamdan’s commitments in the UAE and as part of a global review.

He said: “Sheikh Hamdan has had a long and successful involvement in Australia, initially thanks to his close friendship with Colin Hayes and subsequently with his son David when he took over the licence. During that time, and from initially small numbers of horses in training, champions such as At Talaq, Almaarad, Zabeel and Jeune, together with Group 1 winners Azzaam, Fraar, Istidaad, Tawqeet, Rewaaya and Qafila have raced in his world famous colours.

“However, as those who know him will attest, Sheikh Hamdan is very much a “hands on” man who likes to be closely involved with the Shadwell horses, and due to his commitments in UAE he has not been able to devote as much time as he would like to following their horses in Australia. As a result, and as part of a global review of the Shadwell operation, it has been decided to wind down its racing and breeding operations in the Southern Hemisphere over the next few months.

“On Sheikh Hamdan’s behalf I would like to thank the extended Hayes family, namely Colin, Peter and David, as well as Tony McEvoy, and latterly Ben Hayes and Tom Dabernig together with their excellent staff, for the outstanding job they have done over the years for Sheikh Hamdan and Shadwell; equally I would like to pay tribute to Arthur and Harry Mitchell and their team at Yarraman Park for all their hard work in looking after our breeding stock for the last twenty years or so.

“Shadwell have been a huge supporter of the Australasian yearling market for a number of years now and have been rewarded with numerous stakes winners both in Australia and South Africa – as well as the horses mentioned earlier they have won three runnings of the Blue Diamond with Mahaasin, Nadeem and Reaan, though having been underbidders on both Miss Finland and Estijaab unfortunately the Golden Slipper eluded us. Other recent stakes winners include Enbihaar, Rimraam, Madeenaty, Zamzam and Minhaaj, all of whom will be offered for sale, as well as champions Rafeef, Mustaaqeem, Majmu and Entisaar in South Africa.

“We have made a conscious effort to upgrade the quality of the breeding stock over the last few years and I feel sure that there will be plenty of good buying opportunities for prospective buyers at the upcoming sales. Although it is very sad that we will no longer be represented on the track in Australia I would like to take this opportunity to thank Sheikh Hamdan for his loyal support of the industry over so many years, and to wish all prospective purchasers the best of luck in the years ahead – as we have seen from the recent successful yearling sales on the Gold Coast and at the Classic sale in Sydney there certainly couldn’t be a more exciting time to be involved in such a thriving racing industry.” 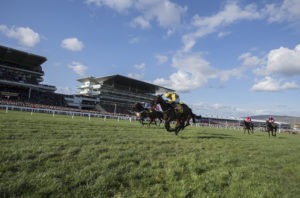 Up Next
WellChild is new partner of the Cheltenham Festival