Coolmore’s outstanding performer Magical, the winner of seven races at the highest level, has been retired from racing to join the operation’s broodmare band in Ireland.

Orpendale, Chelston and Wynatt bred Magical out of the Pivotal mare Halfway To Heaven, who was trained by O’Brien to win the Irish 1,000 Guineas, the Nassau Stakes and the Sun Chariot Stakes in 2008. Magical’s elder sibling Rhododendron was a three-time Group 1 winner with victories in the Fillies’ Mile, Prix de l’Opera and Lockinge Stakes.

Expertly handled on the track by Ballydoyle master Aidan O’Brien, Magical gained the winning thread on her second start as a two-year-old in 2017 and was a short-head second to stablemate Happily in that year’s Moyglare Stud Stakes.

At three, she won the Group 2 Killboy Estate Stakes before landing the first of seven top-flight races when she beat Coronet to claim the Group 1 QIPCO British Champions Fillies & Mares Stakes.

Returning as a four-year-old in 2019, she notched three wins on the bounce in the Group 3 Alleged Stakes, the Group 2 Mooresbridge Stakes and the Group 1 Tattersalls Gold Cup.

Three runner-up efforts in Group 1 company followed before she took her first success in the Irish Champion Stakes and closed out last year with defeat over Addeybb in the Group 1 QIPCO Champion Stakes.

Coolmore elected to keep the daughter of Galileo in training as a five-year-old this year and the decision to do so was vindicated when she added the Pretty Polly Stakes, the Tattersalls Gold Cup and the Irish Champion Stakes to her clutch of elite performances.

Speaking to the Press Association, O’Brien said: “She was a great filly, she ran at the very top level all the time until she retired.

“She was ultra-consistent and just an amazing filly, really. She travelled a lot. She won three Group 1s this year and I was delighted to have her again this year, it was a brave decision of the lads to keep her in training.

“The days that stand out are the Champion Stakes. She was amazing, she always turned up. She was tough, she was consistent and had a super mind and was very sound.

“Her mum [Halfway To Heaven] was a queen, she was a queen and she was by Galileo, so I suppose you could call him the king. It would be exciting to train her offspring.” 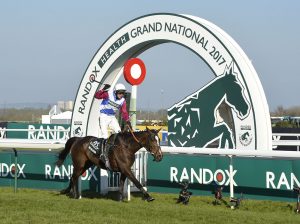 Up Next
Randox extends sponsorship of Grand National Festival