Winning point-to-point pointer was bought by Tom Malone for £50,000

Secret Scripture topped the horses-in-training section that kicked off the Goffs UK August Sale on Wednesday when selling to Tom Malone for £50,000.

The five-year-old son of Mount Nelson had struck in a point-to-point for Donnchadh Doyle of Monbeg Stables at Grennan in May and hails from the same family that produced Cheltenham Gold Cup hero Kauto Star.

Malone, speaking to Racing Post Bloodstock, said: “A lot of Donnchadh’s weren’t right last year, but he said to me that this horse had ability.

“He probably wasn’t truly getting three miles, he’s not bred to get three miles – all his pedigree was two, two and a half miles and it looked like by the last fence in his point he was going to win by ten lengths and then scraped home by a length.

“I put that down to him now getting the trip properly, so he could drop back to a two-mile maiden hurdle.

Doyle was also responsible for selling Etincelle Artiste, second in a three-mile point-to-point at Kirkistown at the end of May, for £40,000 to trainer Nick Alexander.

Alexander told Racing Post Bloodstock: “I love the sire [Great Pretender] and he was second to a good horse on his only start in a point, so hopefully he’s very good value.”

Another to hit the £40,000 mark on Wednesday was Golfe Clair, who broke his maiden in a two-mile hurdle at Clonmel in June for former handler Joseph O’Brien, and the five-year-old was purchased by trainer Phil Kirby on behalf of new owner Peter Rawcliffe.

The day’s second top lot was none other than maiden hurdle winner Canford Light, who was snapped up by Evan Williams for £42,000 and consigned by Tom Mullins’ Doninga Stables.

Thursday will see the conclusion of the Goffs UK August Sale with a session features stores and National Hunt stores beginning at 10am. 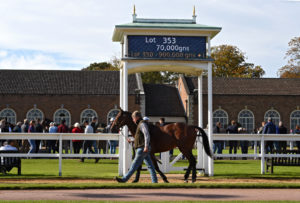 Up Next
Bloodstock Industry Forum publishes new Code of Practice