Thirty-eight years on from Scotland’s first triumph in the world’s greatest steeplechase, One For Arthur provided their second win in the hands of a returning Derek Fox.

After a false start, the 40 runners went charging into the first with the Paul Nicholls-trained Vicente and Cocktails At Dawn becoming the first two to exit the scene.

The Gigginstown pair of Roi Des Francs and Rogue Angel took their rivals along from around half way with the likes of favourite Blaklion just held up off the pace.

As the field made their way to the third last Blaklion took up proceedings and quickly established a healthy lead. All the while One For Arthur and Fox made stealthy headway as did Cause Of Causes.

One For Arthur was only a length down on Blaklion after the second last and went to the front coming to the last. Although pursued closely by Cause Of Causes, the Scottish-trained gelding found a bit more to score by four and a half lengths at the post.

“The only concern was he would be a bit slow through the first five and end up a fair way back,” reflected Fox.

“He jumped so well. For a brief moment I took a small pull out of him but I couldn’t resist much longer after the second last. He’s the gamest horse I’ve ever ridden and he just galloped all the way to the line.”

Becoming only the fourth woman in history to train the winner of the Aintree Grand National, the Kinross handler toasts the biggest success of her career to date assisted by her partner and former eight-time champion jockey Peter Scudamore.

The son of Milan earmarked himself as a potential National candidate after an impressive performance in the Grade 3 Classic Chase at Warwick in January.

Russell said: “I am so proud of the horse. He jumped fantastically and I thought Derek gave him a great ride. He has done us proud, he has done Scotland proud and he has done everyone at the yard proud.

“Before the Melling Road, I was up with the owners and we just shouted: “We’re going to win the National!” With a horse like that and a jockey like that, what could be better?

“Derek is great at getting these horses to finish strongly and I knew that he would stay, so maybe it was a bit bold but it was right.” 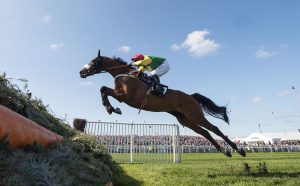 Up Next
Runaway success for Norton