Taking the lead from the moment the tape went up, the eight-year-old set a strong early pace under Noel Fehily to ensure his stamina would come into play over the three miles and, despite being tracked by both Champagne Fever and Cue Card until the home turn, never looked like surrendering his lead. The two challengers faded into fourth and fifth, leaving Dynaste to run on into second for David Pipe, while Silviniaco Conti’s game stable-mate Al Ferof took third for the second year running.

“I knew he would stay and gallop and the plan was to make it a proper test of stamina,” said Nicholls, whose King George tally also includes two wins by See More Business and a record five with Kauto Star. A statue of Clive Smith’s great chaser was unveiled at Kempton prior to racing with the former champ on hand to parade  before the Boxing Day crowd.

Nicholls claims that the addition of cheekpieces has made a huge difference to the running style of Silviniaco Conti, who is now the winner of five Grade 1 chases and is closing in on £1 million in prize-money earnings for owner Chris Giles.

While he is now being aimed at the Cheltenham Gold Cup, in which he was fourth last year behind Lord Windermere, runner-up Dynaste is likely to attempt a second victory in the Ryanair Chase at Cheltenham, while Al Ferof could take his chance in the Queen Mother Champion Chase if Nicholls has his way.

The trainer said: “He has the pace for it and I’d love to see him bowl along in front. I just need to persuade John [Hales, owner].” 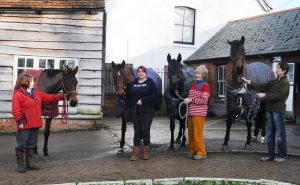 Up Next
Coneygree strikes again at Kempton