One of jump racing’s most adored possessions, Cue Card, made little mistake in taking his second Betfair Ascot Chase en route to another crack at the Cheltenham Gold Cup next month.

With the front two coming clear down the back for the final time, Cue Card gradually ate into the lead and loomed up alongside at the fourth last.

Paddy Brennan sent him to the front after the third last and the three-time Betfair Chase hero began to open up after the second from home.

The gelding crossed the line with a commanding 15-length advantage securing a ninth Grade 1 prize in the process.

“It was a good performance, the ground was really dead and it’s hard to judge what sort of pace we were going,” reflected Brennan. “I looked around after the last I thought I was two or three clear and I was 20 clear and that sums up what a horse he is.

“He’s been massive for my career and changed my life for the last couple of years. He’s 11 but you wouldn’t think it.”

The son of King Theatre’s victories at the highest level began way back in 2010 when he ran out an impressive winner of the Champion Bumper at the festival.

He will be heading to the Cheltenham Gold Cup in March where, in last year’s renewal, he was unlucky when falling at the third fence from home.

Joining him this time will be his stable mates Theatre Guide, Native River and Thistlecrack.

Tizzard said: “The pressure builds up every time he runs because of the responsibility to him. He’s as good as he’s ever been and the race was made for him today.

“He’s been about a long time and he’s a favourite for all of us. It was lovely prep.”

Earlier in the afternoon, the Rebecca Curtis-trained Bigbadjohn showed a willing attitude to land a close finish to the Grade 2 Sodexo Reynoldstown Novices’ Chase.

The son of Vinnie Roe, partnered by a returning Jonathan Moore, came from the rear of the field in what was a truly run race from the outset.

Although a few lengths down on Coneygree’s half-brother Flintham after the last, the eight-year-old got up in the shadows of the post to win by a short-head. 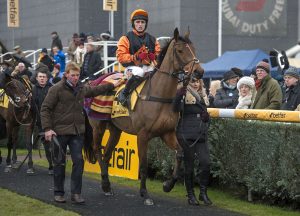 Up Next
Keeps on improving