Yet another sale topper for Clare Manning's Boherguy Stud
Stories

Trainer Seamus Mullins will be the new representative of the Horsemen’s Group on British racing’s independently chaired Horse Welfare Board having been appointed to take over from James Given.

Mullins will replace Given, who is set to take up his post as the British Horseracing Authority’s new Director of Equine Health and Welfare early in the New Year. Given will remain on the Horse Welfare Board in his new capacity, replacing the outgoing David Sykes.

A passionate advocate for horse welfare, Mullins has held a trainer’s licence for over 25 years and has held positions on a number of industry groups during that time, including as President of the National Trainers Federation between 2016 and 2018.

Mullins said: “I’m greatly looking forward to joining the Horse Welfare Board and working with the racing industry to implement the strategy published earlier this year.

“Our welfare record and the passion of those working alongside our horses gives us much to be proud of as an industry, but there is always more that can be done, and I feel privileged to have the opportunity to represent the views of fellow practitioners as we work together to keep improving our standards.”

Barry Johnson, Chair of the Horse Welfare Board, added: “I’m thrilled to have Seamus joining the Board and I’m sure his extensive experience both as a trainer and contributing to the many industry groups and committees he has been part of will bring useful and insightful experience to our ongoing work.” 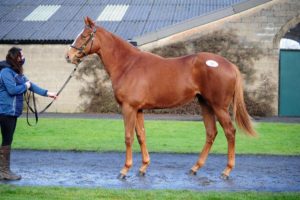 Up Next
Yet another sale topper for Clare Manning's Boherguy Stud