The European yearling sales season has made a positive start and the industry must be encouraged as we head into eight days of sales at Tattersalls this month. The earlier yearling sales delivered strong results and created optimism for vendors.

Of these, Doncaster’s Premier Sale, whose focus is undoubtedly on the two-year-old market, attracted a number of new buyers, whilst established purchasers also demonstrated an increased appetite for early maturing yearlings.

Importantly, this sale posted increases in average and median prices as well as clearance rates. With fillies showing a great improvement in sales returns, this must be a positive signal to encourage breeders at least to maintain their broodmare numbers. Undoubtedly confidence is a key driver of the bloodstock market, and whilst I hesitate to confirm that the industry is turning a corner, the wider economy is signalling a return to growth and property prices are on the increase. Furthermore, we can also take heart from the fantastic start witnessed at Keeneland with averages back to pre-2008 levels.

In spite of the positive upturn in sales prices, vendors’ support for the RPYBS remains strong. We cannot hide from the fact that breeders and vendors now have two self-help schemes. With the market showing increased returns, support for BOBIS, which importantly for TBA members includes breeders’ prizes, must surely be an obvious choice in the longer term.

Proposals for the 2014 Scheme include increased central funding to match the £10K bonuses, the added possibility of prizes for placed horses, and a focus on further favourable treatment for fillies’ races. The significant financial contribution from the Levy Board sets BOBIS on a different level, with greater opportunities, which in 2014 includes 800 races.

As the yearling market improves, BOBIS’s clever dual strategy will continue to incentivise both owners and vendors, as the returns generated reward all the contributors, whilst also delivering an increase in field sizes, a key indicator for the racing industry. Whilst I do not want to get side-tracked by talk of concerns about the respective scheme overheads, both are, I believe, efficiently run, modest operations.

So what about the other components our industry needs to secure to support the positive market indicators? I sincerely hope that the much promised prize-money agreements between the Horsemen’s Group and the racecourses soon materialise, and certainly in time to boost confidence at this month’s yearling sales. The minister has extended the levy determination to October 31 in the hope of a voluntary agreement, but our government appears to show little appetite to support racing on any front. Progress on the off-shore question, the levy determination and its replacement or improvement are all allegedly frustrated by threats of a cabinet reshuffle, changes in officials and stretched resources in DCMS.

The BHA Chairman, Steve Harman, when he met with Louise Kemble and I recently, had a clear vision about government’s views on racing and its profile. I applaud the BHA’s political lobbying activities but ministers and officials continue to appear reluctant to help the second largest sport with an economic impact of £3.45 billion. I sincerely hope that the BHA, under its new Chairman, has a new political strategy up its sleeve.

The TBA, armed with the information from the PwC Economic Impact Study, will be well placed to add support to racing’s political lobbying, and in doing so we want to underline our message that the TBA has a significant part to play in the wide range of issues managed by the BHA.

Another recent meeting, this time with GBRI’s newly appointed International Executive, Carter Carnegie, encouraged Louise and I that Lucinda Hird’s appointment to the newly created post of Marketing and Communications Director for the TBA, will enable the TBA to compliment Carter’s role. Lucinda’s early brief will include a strategy to increase the TBA’s support for bloodstock marketing, as well as raising the profile of the Association. 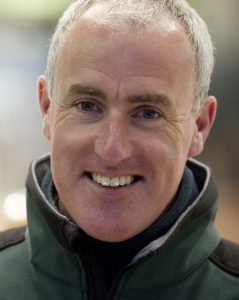 Up Next
Market stays strong for Tattersalls auction