Young Coolmore stallion Saxon Warrior took centre stage during the opening session of the Goffs November Foal Sale on Monday when accounting for three of the top four lots.

At €88,000, a colt out of Gravity Queen, an unraced Holy Roman Emperor relation to Group 1 winner Zambezi Sun, was the most expensive of the trio. James Hanly’s Ballyhimikin Stud, which enjoyed such a good yearling season with its pinhooks, came out of top for the colt, who was bred by Dermot Cogan and sold by Kildallan Stud.

The opening session of the Goffs Foal Sale is traditionally one of the more low-key days ahead of a better quality of trade on days two and three. Nevertheless, the figures showed an improvement from the corresponding day in 2021, with 172 foals selling for a total of €3,514,000 and an average of €20,430, up six per cent from last year.

The €62,000 mark was also reached by a Kodi Bear filly sold by Summerhill Stables to Tally-Ho Stud. It marked a return to similar territory for last year’s leading buyer, who not only bred her dam, the winning Armum, but also the mare’s high-class half-brother Ardad.

Pinhooker Philipp Stauffenberg, meanwhile, demonstrated his regard for Dandy Man by coming away with two lots by the Ballyhane Stud stallion headed by a filly out of the winning Sea The Stars mare Astonished for €85,000.

“She was one of the best physicals of the day,” said Stauffenberg. “Joe Foley bought the half-sister by Night Of Thunder for €160,000, so there’s every chance that there will be an update there.”

Among the first-crop sires, there was a noteworthy result for Coolmore’s Coventry Stakes winner Arizona as the sire of a half-brother to Eldrickjones – himself also runner-up in the Coventry Stakes of his generation – who sold for €60,000 to Peter Nolan.

“He’ll come back for resale and the mare has already produced two good horses by Cotai Glory [Eldrickjones] and Pride Of Dubai [Moddy Poddle],” said Nolan of the colt sold by Ballybin Stud. “He’s a good-sized, strong, good-looking colt, a good representation for the sire. I’ve liked his stock.”

Queen Elizabeth II Stakes hero King Of Change also took his share of attention courtesy of a colt related to Group 3 winner Starlish who realised €50,000 to Peter and Ross Doyle. The son of Farhh has relocated from Derrinstown Stud to Micheal Orlandi’s Starfield Stud for the 2023 season.

“Peter [Doyle] and Flash Conroy bought him and the plan will be to re-sell him as a yearling,” said Doyle. “He was as nice a foal as we saw here at Goffs today– a good physical with a very good walk. Richard Hannon held King Of Change in very high regard, which is a big help. We have seen some nice foals by the sire. They are very nice types.”

The sale continues on Tuesday from 10am. 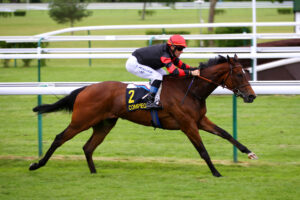 Up Next
Going Global