Edging his way to the top
Stories

Sales catalogues: is the end nigh?

As more sales-goers choose to view catalogues via tablets, the printed page is becoming less fashionable

That bastion of sales-ring culture, the catalogue, is under attack from a form of technology that is thin, informative and increasingly fashionable.

‘Tablets’ are computers that look like slim laptops minus the keyboard, yet offer the same internet access that enable users to study sales company websites and view catalogue pages while on the move. Increasingly common at bloodstock auctions they raise the question, has the catalogue had its day?

Traditionalists will be appalled at the notion and could not imagine an auction without a printed book, often sandwiched in a leather holder embossed with their initials. They regard catalogues as a tool of the trade, yet the new kid is proving a nimble rival suited to contemporary times, albeit with reservations.

Ballylinch Stud’s John O’Connor speaks for many when saying: “I prefer a catalogue through habit. I acknowledge I haven’t invested enough time to appreciate the benefits of tablets. If I gave more time to getting good at operating them quickly I might actually save time.”

Paper and printing costs have risen sharply and the cost of posting a bulky catalogue is considerable. Tattersalls sold horses to buyers from 55 countries last year, so big savings are afoot if traders can be weaned to view catalogues on screen and use tablets at sales.

Henry Beeby, the head of Goffs and Doncaster Bloodstock Sales, admits: “It’s only a matter of time before we stop producing catalogues in current numbers. The global nature of the business is changing the way we do things and the cost of producing catalogues runs to many hundreds of thousands of pounds.

“I don’t see the catalogue being phased out, but maybe in five to ten years it could be in the minority.”

Beeby affectionately remembers Telex, not to mention once-popular faxes, communication systems that were quickly dated. Current tablets could look like ancient scrolls before Frankel’s first grandchildren reach the breeding sheds, but they have not peaked yet according to Jason Singh of Tattersalls’ marketing department.

He says: “Online catalogues will become more advanced – at present online pages look like conventional catalogue pages and users tend to mimic what they can do on paper. Some simply look at PDFs of our pages via Tattersalls’ website, others use apps which enable them to make notes on screen.

“In future these pages will carry more information – updates will appear, drop-down windows will provide form, details of past sales, clips of races and so on.”

Tattersalls prints some 115,000 catalogues for the nine sales it stages at its Newmarket headquarters, and while the vast majority find good homes there are always left overs. Despite that Singh assures: “At the moment we are not reducing the number of catalogues we print and I don’t believe the end of the catalogue is nigh.”

Those who fear its demise will have been alarmed by Brightwells’ decision not to post one out ahead of December’s Cheltenham sale, claiming the event’s proximity to November’s auction was a factor. Brightwells’ healthy trade in wildcard entries undermines the traditional catalogue, although Matt Mitchell, who heads the firm’s bloodstock division, says: “We only allow wildcards for horses showing an appropriate level of form, not because a vendor has forgotten an entry. We have noticed more people using tablets, but many bloodstock agents still prefer making notes in catalogues they can refer to at a later date.”

Two years ago Brightwells sold catalogues in a bid to offset printing costs, but the company recognises a widely-distributed free catalogue provides vital marketing. Other companies share that opinion, which should prolong the catalogue’s life.

The catalogue user
Will Edmeades, bloodstock advisor and racing manager
“I don’t think I’ll ever be grown up enough to use a tablet at the sales. I haven’t got time to learn to use one quickly. Before sales we mark catalogues, putting updated form in green and past sales history in red – how would you do that with a tablet?”

The tablet user
Bloodstock agent Oliver St Lawrence
“I first used a tablet at Goffs’ mares’ sale in 2011 – I liked the idea of having a library at my fingertips and being able to look back at what I thought of a mare’s yearlings, rather than ringing my secretary to dig out back catalogues and look up my scribbled notes. I don’t write notes on screen, but use a drop-down menu that enables me to tick various boxes relating to conformation. Battery life is not great and I would like to back-up my notes more easily. I feel a bit of a nerd using a tablet, but I’m persevering with mine and recently bought the latest model.”

The dual user
Bill Dwan of The Castlebridge Consignment
“I’m a catalogue man, but I keep an iPad in my coat pocket to look up information on the Racing Post site. I’m a traditionalist, and not the most technically-minded. I like the catalogue because I can make notes on it – it’s habit I suppose, but I’m not saying I’ll never go over to an electronic catalogue alone.” 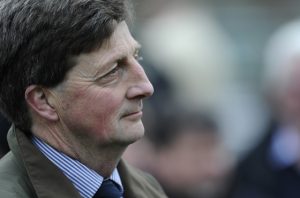 Up Next
Edging his way to the top