Respected, enthusiastic, extremely knowledgable and unassuming, Wills belonged to a dwindling pool of owner-breeders so important to the fabric of British racing

The two-mile handicap at Kempton Park on Wednesday, August 3 might not have attracted much attention from the wider racing world, save for the fact that it was won by an interesting four-year-old now fulfilling his potential as a progressive stayer.

Murau’s win that evening, however, had a real poignancy to it, with it being announced not long after that his owner-breeder Dr. Catherine Wills had lost her battle with cancer aged 71.

Respected, enthusiastic, extremely knowledgable and unassuming, Wills belonged to a dwindling pool of owner-breeders so important to the fabric of British racing. She was also a member of the Jockey Club and co-founder of the Martin Wills Memorial Trust, created in honour of her brother who passed away in 1992. The Martin Wills Writing Awards, for which she was a judge over its 25-year history, helped open doors for numerous budding journalists into the industry.

Outside of racing, Wills was also a doctor of history of art and penned a biography of the Victorian portrait painter Sir Francis Grant.

Under the banner St Clare Hall Stud, Wills maintained a group of mares in Britain, based latterly at Kirtlington Stud, in addition to Ireland and Kentucky. Murau epitomises the essence of St Clare Hall breeding as a son of an unfashionable yet effective stallion – Mukhadram – from a fine staying family; he is a grandson of Applecross, dam of the excellent stayer Invermark and Princess Of Wales’s Stakes winner Craigsteel for her father Sir David Wills.

Stayers were appreciated and afforded the necessary patience. On the other hand, the Sleat family, which had shone under the father’s ownership as the source of Jersey Stakes winner Ardkinglass, is apt to throw a quicker individual, as illustrated by the Gimcrack Stakes winner Sir Gerry, a son of Carson City bred in Kentucky by Wills out of Incredulous.

Like her father, Wills enjoyed success with Sir Henry Cecil, trainer of her homebred Listed winner Succinct, and also forged an excellent and length association with James Fanshawe, who saddled Eilean Shona to become her first stakes winner in a Listed handicap at Newmarket in October 1999. Fanshawe also sent out Invermark to win the 1998 Prix du Cadran.

“Catherine was mad about horses and mad about pedigrees,” he recalls. “Sir David gave her a daughter of Reuval called Fetla and from her she bred Be Mindful, quite a useful horse who was third for us in the Horris Hill Stakes, and Incredulous, a useful filly in her own right who bred Sir Gerry. And when Sir David died [in 1999], she inherited all the mares.

“I remember I had a group of horses heading to the December Sales in 1996 and there was a Zilzal filly called Flamboyance who had shown ability at two. I suggested to Catherine that she might suit her. She liked her, bought her and she won for her here and in the US. And from her, Catherine bred Dynever.”

Dynever, a son of Dynaformer foaled in Kentucky, won a pair of Grade 3 races and ran third in the 2003 Breeders’ Cup Classic before becoming a successful stallion in Saudi Arabia.

“Catherine thought things out very carefully,” says Fanshawe. “She was very particular in which stallions she would use. She was a great horse enthusiast, she would make her mind up on a horse or a stallion and would do what she felt was best. Her horses might not have always been commercially produced but she would look at the bigger picture, of how they might work with the family and their potential value as older horses.”

One such horse was Selino, a Champs Elysees grandson of Applecross. Selino won twice for Fanshawe and hit a rating of 105 before selling to Australia, where he won last year’s Group 1 Sydney Cup at Randwick.

As is typical of owner-breeders, Wills reaped the rewards of having cultivated a family over a long period of time; by breeding from  descendants of mares who had been introduced to the stud decades earlier, owner-breeders naturally come to know their mental and physical characteristics. As such, it is sad to think that few such enthusiasts remain today, a stark contrast to a previous era when stock belonging to Lord Astor, Lord Howard de Walden, Lionel Holliday, Sir Victor Sassoon, Jim Joel and Dorothy Paget among many others graced the turf.

“It is sad,” says Fanshawe. “From a trainer’s point of view, owner-breeders can be your chance of getting a good horse.

“Catherine was a kind, unassuming person. She was a key figure behind the Martin Wills Writing Awards – a lot of time and money went into that. She also never forgot the staff in the yards and cared deeply where the horses ended up.”

So what now for Murau? Successful in three of his four starts this season, hopefully he can continue to do his late owner proud.

“Murau is very typical of the family,” says Fanshawe. “He’s a big, imposing horse and he’s getting better with age. Basically, he’s doing what he was bred to do.” 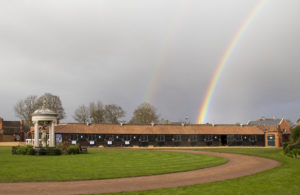