New schedule approved by the Queen

Seven-race cards each day at Royal Ascot will continue permanently after the Berkshire track announced the extension to the five-day meeting has been approved by the Queen.

Introduced last season as a way to cater for horses whose campaigns were interrupted before racing resumed on June 1, Ascot introduced the Copper Horse Stakes, Palace of Holyroodhouse Stakes and The Golden Gates Stakes. The Buckingham Palace Stakes, which departed after the introduction of the Commonwealth Cup, was restored.

Those four races have been retained alongside the addition of the Kensington Palace Stakes, a new handicap to be run over a mile on the Old Mile course for four-year-old and upwards fillies and mares.

For this year’s five-day meeting, which begins on June 15, the additional races will be run as the final contests each day. The exception will be on the Saturday, where the Golden Gates Stakes will be the sixth race as the meeting concludes with the traditional running of the Queen Alexandra Stakes.

The Queen Anne Stakes will return to its usual position of opening the Royal Meeting meeting having been run as the second race on the first day in 2020.

Sir Francis Brooke Bt., Her Majesty’s Representative at Ascot, said: “A positive that we drew from Royal Ascot 2020 was that the additional races presented more opportunities to participate and that this had been widely welcomed by owners, trainers, breeders and jockeys.

“We are delighted to be able to make this change permanent.”

Nick Smith, Director of Racing and Public Affairs at Ascot, added: “The concept of extended cards last year was well received, and we are very pleased to be able to offer additional opportunities to the horsemen community, the public, broadcasters and media going forward.

“At this time, more than ever, the increased opportunity to win prize-money and to generate more levy and domestic and overseas betting income is crucial.

“Following consultation with the BHA, we decided to remove the two reserve races and bring in another high-quality handicap, as we are actually reducing the number of races run by one from last year, where eight races were staged on the Saturday. It occurred to us that the Old (round) Mile course is only used twice during Royal Ascot and another race on this track would add to the variety on offer.

“Last year’s extended cards were only possible by reducing some field sizes slightly, and because no overnight stabling was allowed under Covid-19 protocols.

“In order that field sizes can go up to their maximums again and with overnight stabling extremely important, we have commissioned extra temporary stabling to be built to the required high BHA standards.

“Royal Ascot is constantly evolving and has benefitted from any recent race additions and promotions and we are excited that the week will now be bigger and better for everyone.” 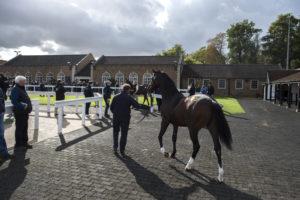 Up Next
Tattersalls February Sale to be staged online