In an eventful running of the Prix de Diane – the third French Classic of the season – the unbeaten La Cressonniere, displayed a good turn of foot to seal victory for trainer-of-the-moment Jean-Claude Rouget, who was to triumph in the race for a fourth time.

The three-year-old filly by Le Havre, himself a winner of the Prix du Jockey Club for the same connections, was held up off the early fractions by Cristian Demuro. The former Italian champion jockey had partnered her to success in the Poule d’Essai des Pouliche – the French 1,000 Guineas – just over a month ago.

As the 15-runners fanned out into the Chantilly home-straight, La Cressonniere came with a withering run on the outside to secure the win by a comfortable half-a-length from the Wertheimer filly Left Hand and the Prix de Sandringham heroine Volta.

There was drama back in the pack as the Andre Fabre-trained Armande, who met trouble in running last time out in the Group 3 Prix de Royaumont was squeezed out in the final furlong and unseated rider Pierre-Charles Boudot, who came away unscathed. William Buick’s mount Highlands Queen was judged to have caused the interference and was disqualified by the stewards post-race.

For Rouget – who claimed a second Royal Ascot success this week courtesy of Qemah in the Coronation Stakes – this victory secures both of the middle-distance Classic’s for the Pau-handler, after Almanzor scooted to success in the French Derby for owners Caro and Augustin-Normand, who also taste the double.

The Aidan O’Brien second-string Coolmore was to fare best of the three British and Irish challengers after leading the field into the final furlong under Seamie Heffernan. Their leading hope Ballydoyle, who was drawn out wide suffered interference leaving the stalls and was positioned in last for much of the race under Ryan Moore. Royal Ascot’s leading jockey was forced to come widest of all on the Galileo filly, but could make no impact on the leaders to finish sixth, one place behind her stablemate.

John Gosden and Frankie Dettori were seeking back-to-back wins in the race following Star of Seville’s success. Their charge this time around Swiss Range, who wore a hood to victory in the Pretty Polly Stakes at Newmarket, was keen without the headgear and despite bouncing out into a handy position couldn’t pick up as expected in the run to the line.

Earlier in the afternoon, the German raider Pas De Deux caused an upset in the Group 3 Prix Bertrand du Breuil for trainer Yasmin Almenrader. The six-year-old colt by Saddex was well placed just off the leaders in fourth under Antoine Coutier and held on to make it a trio of Group 3 wins.

Former British 2,000 Guineas runner-up Territories, went off a warm favourite under Mickael Barzalona, and after being held up last for most of the contest, failed to make an impression back in fifth, on ground which may have been softer than ideal for the Godolphin four-year-old. 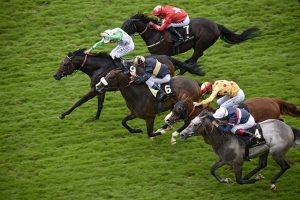 Up Next
Twilight Son strikes in Diamond Jubilee