Emma-Jayne Wilson was delighted to be back at Ascot for the Shergar Cup, away from troubling times in her native Canada

Emma-Jayne Wilson is thrilled to be back in Britain. The Canadian rider is having a blast at Ascot’s Shergar Cup, six years after her first appearance at the international jockeys’ meeting.

Although she manages no better than a fourth place from her five rides, it’s clear that the girl who took North American racing by storm in 2005, landing the Woodbine riders’ title while still an apprentice, is more than comfortable on the big stage.

Laughing and joking with team members Hayley Turner and compatriot Chantal Sutherland as the trio is interviewed for TV, her demeanour belies a woman whose livelihood is under serious threat.

Back home in Ontario, where Wilson has secured the majority of her near 1,000 winners – a haul that includes a Canadian Classic and two championships – horseracing is perched on the edge of a precipice.

An end to slot machine operations at racecourses, as decreed by the provincial government, stands to wipe out the state’s main source of prize-money and leave Canadian racing and breeding in tatters.

I grew up with Woodbine. The possibility of having that go… I can’t even think about it

Fort Erie, the track that launched the career of Northern Dancer and where Wilson rode her first winner, could close within months. Woodbine, home of the Canadian International and past host of the Breeders’ Cup, is also in danger. Clearly this is no Hereford and Folkestone – more Ascot and Epsom.

“What we’re talking about is the potential death of horseracing in Ontario,” says Wilson, aware of how serious the threat is. “Fort Erie has been in trouble for a long time, before this latest situation arose. We’ve tried to keep it afloat but this news sounds like the final nail in the coffin.

“If I had the money I’d buy Fort Erie myself but it’s not as simple as that. I would hate to see somewhere with so much history fall by the wayside because of a government decision over finances.

“Woodbine is a beacon for Canadian horseracing. I grew up with the track in my back yard. It’s internationally renowned. The possibility of having that go… I can’t even think about it.”

But think about it she has. If a report into the future of Ontario racing is accurate, just a single thoroughbred racecourse could be left standing in a future without slot machines. It has forced Wilson, 31, to re-evaluate her world and acknowledge that she may have to leave Canada to continue riding.

“I’ve toyed with a few different ideas,” she admits. “There is racing all over North America. I could pack up and go somewhere else. Would I be happy to do that? No. But that may have to be the sacrifice. It’s tough to say whether I’d move permanently.”

And what if she had the opportunity to ride in Europe longer-term and put some variety into her daily routine of going left-handed?

“I think that any time an offer like that comes up you have to take it seriously,” she says. “One winter I was riding in New Orleans and Hong Kong called and asked if I was willing to come. I hatched out a few details and I went for two months.

“I’d love to bounce around every track in Britain and have a ride at each. The variety of courses is intriguing. North American courses have been simplified more for the gambler – it’s the same thing every time, but I’ve never known anything different.

“You can take a horse from one locale and run them at another and the variables are fewer. By the same token you don’t get the potential differences to benefit your horse. I prefer to ride on turf – that’s my favourite – but I don’t mind dirt.” 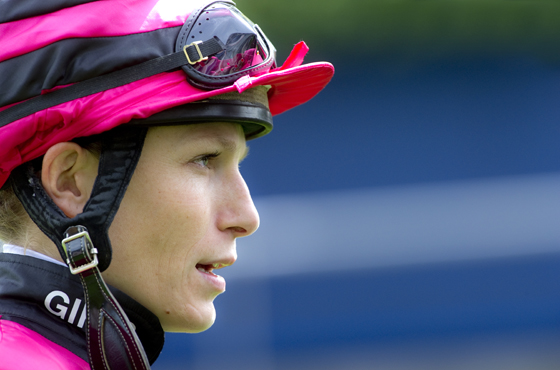 Had life taken a different turn, Wilson could easily have grown up with Newmarket, not Woodbine, as her local track. Her British parents, Jim and Lynne, swapped Essex for Ontario in 1981, the year Emma-Jayne was born.

Initially, there were no thoughts of breaking records or riding on the international stage for the young woman who studied equine management at the University of Guelph – just to have made it to the track was an achievement in itself.

“I remember saying to my parents when I was a kid that I’d be happy to ride in five races and finish last in all of them,” Wilson says. “Because it was my dream to be a jockey and at least I would have achieved my dream.

“When I realised the potential I had – what I could do in this sport – then my goals started to develop.”

With a victory on Mike Fox in the 2007 Queen’s Plate – the first leg of the Canadian Triple Crown and the nation’s oldest horserace – heading a CV that also features an Eclipse Award and two Sovereign Awards, the goals now include a win at North America’s showpiece racing event, the Breeders’ Cup.

Her best placing to date was a second aboard 33-1 shot Excaper behind the Aidan O’Brien-trained Wrote in last year’s Juvenile Turf and Wilson would love to go one better.

“It would put a feather in my cap, certainly,” she says. “The Breeders’ Cup is very much the showcase that is horseracing around the world. It’s tough to put into words how I would feel.

“The opportunity is always out there to try and get more rides there. It’s the pinnacle of our sport because it’s not easy to get to, for horses or jockeys.”

If Wilson is to secure an extensive book of rides at Santa Anita in November it will be down to Mike Luider, her long-time agent and the man who spotted Wilson’s potential a decade ago.

The jockey appreciates how important Luider has been to her career so far – “I’m a terrible agent; in Hong Kong I had to hustle for mounts and it was very challenging” – and the partnership enables her to relax away from the racetrack.

Wilson says: “When I go home I’m not a jockey. It’s not who I am, it’s what I do. After reviewing the races with Mike, I’m Emma Wilson and I go home, I play with my dogs, I cook some dinner and I watch some television. I don’t think about racing at all.

“I once had a filly – it was actually my first stakes win – and I handicapped the race the night before. Needless to say the entire night was dreams of how the race was going to play out, what I would do, tactics etc.

“The race didn’t go anywhere close to my dreams, although I won, but there was no point in me handicapping the race the night before. All it did was make me think about it too much.”

She adds: “When the racing season is on, your spare time is very limited. One thing I’ve learned is that rest is very important. You can push so much but if you don’t take enough time to recover then you’re done.”

While the Shergar Cup may not be to everyone’s taste – the event was won by the Rest of the World team featuring Yutaka Take, Aaron Gryder and Matthew Chadwick, with the girls in third – there’s no doubt it provides something a little different for racing fans.

The fact that an international team of three women, all winners at the highest level, can now be assembled is testament to the global progress that has been made in a sport that once looked at female riders as something of a novelty.

Does Wilson think there are trainers or owners today who won’t put her up because she’s a woman?

“I’m sure if there are, they haven’t seen me ride,” she says. “I know there were some at home who downright refused to put a girl on a horse. But I know I’ve ridden for them.

“One of the taboos was that girls aren’t as strong as guys. My strength in the saddle is something I take a lot of pride in. I was always told as a young rider that girls are weaker. So I thought, ‘I’m going to prove them wrong’. And I have.” 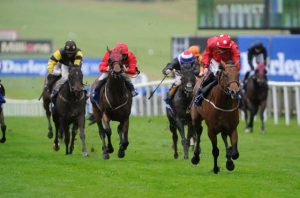 Up Next
Finding talent