‘Racing can’t be dependent on bookies’

Robin Geffen, joint-owner of 2010 St Leger winner Arctic Cosmos, has no wish to involve himself in racing politics but he does envisage a time when he could take a role in the sport.

Already, his instinct to “put something back” has developed a strong sponsorship portfolio, including the Neptune Investment Management Novices’ Hurdle at the Cheltenham Festival, and he is open to further expansion. Even the Grand National is not ruled out.

“We are always looking at races that might suit us,” he says when asked about the imminent void at Aintree. “Who knows what we might do next? The National is a high-profile race and it is available but I do think continuity is important. We don’t want to be leaping from one race to another in search of greater prestige.”

Recently, he added to the established series of middle-distance novice hurdles leading to the Cheltenham Festival by backing a Flat programme for young stayers. “It’s the road to the St Leger, which is obviously close to my heart,” he explains. “Like our jumps races, it is a coherent sequence of events.

“Racing is littered with people who seem to take out but put nothing back. I worry about the sponsorship environment and we don’t want a situation where we are entirely dependent on bookmakers. Some have the best interests of racing at heart but others clearly don’t.

“I wanted a clear sponsorship programme and I think we have it, so it really upset me when a journalist in the Racing Post decided it would be funny to be rude about the title of our races. We don’t choose them, the racecourses do, and that made me really angry.

“The racing industry needs help from everyone who participates and journalists should really think twice before they start to lacerate sponsors.

“It was particularly inept as it came after the weekend when we lost [chaser] Cristal Bonus, which they didn’t have the grace to mention. A lesser man might have said that’s the end of sponsorship but we have gone in again because I believe in putting back.

“There is still a lot of work for me to do at Neptune and that will be the case for five or ten years. After that, I’d like to put some time, rather than just money, into racing. Racing politics is not my thing but I have commercial experience and I’m sure there is something useful I could do.” 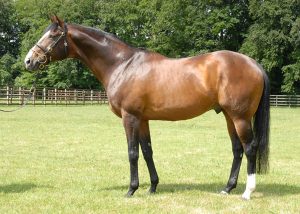 Up Next
Classic sire Hernando dies at 23