Robbie Dunne’s ban for bullying and harassing weighing-room colleague Bryony Frost has been reduced to ten months from 18 months by the Appeals Panel after hearing the case on Wednesday.

Despite knocking eight months off the original penalty handed down in December, Appeals Panel Chair Anthony Boswell QC concluded that Dunne’s behaviour was “reprehensible and disgraceful”.

The Panel has ruled that four breaches of Rule (J)19 originally found by the independent Disciplinary Panel, relating to conduct prejudicial to the sport, have been adjusted to one overarching breach, which covers all offences.

Dunne’s suspension will now run from December 10, 2021 to October 9, 2022 and means the rider will almost certainly be back in action later this year.

Following the verdict, the BHA issued a statement, saying: “The independent Appeal Board has today upheld the decision of the independent Disciplinary Panel that Robbie Dunne is in breach of Rule (J)19 in that his conduct was prejudicial to the integrity, proper conduct or good reputation of horseracing in Great Britain. We acknowledge their decision to amend the penalty he will serve and await the full reasons in relation to that aspect.

“This reduction in penalty in no way diminishes the recognition of the severity of the allegations that were brought against Mr Dunne. Indeed, it continues to send a clear message that conduct of this nature cannot be tolerated in any working environment within our sport.

“Following the original decision last year, the BHA released a statement which outlines our commitment to improving workplace standards, conduct and wellbeing. Work is continuing with industry colleagues to finalise the industry code of conduct, with a view to it going before the BHA Board in the first half of the year. A cross-industry working party has also been formed to look at ways of improving education and awareness around the standards of conducted expected across the sport.

“Once again, we recognise that this has been a challenging period for all involved in this complex and emotive case, and we ask that the privacy and wellbeing of both parties is respected as they continue to receive the support of the appropriate bodies and those close to them.

“We now await the Appeal Board’s written reasons before we can comment on any of the technicalities around their findings or any other matters associated with the hearing.” 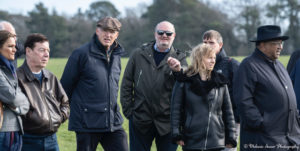 Up Next
Newsells Park celebrate launch of Ossie Ardiles Syndicate