Early season domination by the Colin Tizzard yard entered its next chapter following Native River’s tenacious display in the 60th running of the Hennessy Gold Cup.

Supported into strong favouritism, the six-year-old was always in the firing taking a lead from Coologue early on. Saphir Du Rheu exited at the fourth flight, at what looked a frenetic early pace.

As the screw was turned after the 16th, Native River took up the lead under Richard Johnson but surrendered it to Double Ross, after a slow leap at the cross fence five from home.

Into the home straight, the champion jockey got his mount back on terms with the leader two out and went on again.

A good jump at the last saw him gain a six-length lead over his field but a late surge over the last from Carole’s Destrier and Noel Fehily made things look interesting.

Native River was not to be denied in the short run to the line, securing the Grade 3 prize by half-a-length.

For Johnson, this prestigious three mile and two furlong contest had alluded him until now. The 39-year-old has partnered the gelding on his last three outings which included a Grade 1 Novices’ Chase win at the Aintree Grand National meeting.

“Everyone keeps telling me how I haven’t won this race so it’s always nice to get one that you haven’t done before,” reflected Johnson. “He’s a fantastic horse. Turning in I was a bit worried I wasn’t going that well, but he’s just one of those horses, the more you ask the more he gives.”

The Dorset-based handler gave his charge a pipe opener just under a month ago over hurdles on Charlie Hall Chase day, when he finished a creditable second in Grade 2 company.

A landmark first Hennessy for the Tizzard’s too, this result comes only a week after Cue Card’s impressive third win in the Betfair Chase.

Tizzard: “Everything was night for him today, his form last year, the one run and the light weight.

He travelled better today than he ever has

“We expected a big run. He travelled better today than he ever has. I can’t believe it.”

Earlier in the afternoon, Thistlecrack made his third appearance over fences in the bet365 Novices’ Chase.

Taken to the front from the outset by Tom Scudamore, the eight-year-old didn’t put a foot wrong and cruised clear on the bridle to win by eight lengths from the Rebecca Curtis-trained Bigbadjohn. 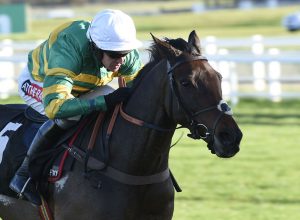