The high regard for the Dubawi sire line was well on show during the second session of the Goffs November Foal Sale on Tuesday.

Of the six lots to hit six figures, four were by sons of the outstanding Darley sire with Tally-Ho Stud’s Mehmas the only stallion capable of interrupting their rule.

The quartet represented a mix of the proven in Night Of Thunder and New Bay as well as a new name in Godolphin’s Ghaiyyath, the highest-rated horse of 2020 whose first crop of foals have unsurprisingly hit the ground running commercially.

It was Ghaiyyath who supplied the day’s most expensive lot in a colt bred by John Banahan out of the triple-winning Cross My Mind. The first foal out of his dam, a Cape Cross half-sister to the Group 3 winner One Voice, he is due to return to the ring next year after falling to Ger and Brendan Morrin of Pier House Stud at €185,000.

“He was the best horse here today although I was disappointed to see [underbidder] Tony O’Callaghan come in because then I knew he’d make a fair bit,” said Brendan Morrin of the colt, sold by Ridge Manor Stud. “He’s a lovely colt, a grand, big, scopey horse for a first foal and he comes from a good farm.

“We’ve bred to Ghaiyyath twice ourselves. He’s a son of Dubawi – you have the likes of New Bay and Night Of Thunder at stud by him already. You can’t get enough Dubawi on any farm in my opinion.”

Full circle moment for first season sire GHAIYYATH as
a colt by the World Champion (Lot 474) from Ridge Manor Stud sells to Pier House Stud for €185,000 at #GoffsNovember. pic.twitter.com/0jTO1eQulu

Only four foals by Darley’s proven young stallion Night Of Thunder are catalogued to sell over the next few weeks and pinhooker Brendan Holland of Grove Stud made most of the opportunity by going to €180,000 for Airlie Stud’s colt out of Good Place.

The colt was bred by the Australian-based Rosemont Stud, who purchased his dam, the Street Cry mare Good Place, for €80,000 in this ring last year. It’s a truly international pedigree since his American-bred dam was stakes-placed in Dubai and is a granddaughter of the triple Australian Group 1 winner Canny Lass.

“He’s by a super young stallion who has been very lucky for me – I had [Listed winner] Lady Penelope by him out of his first crop,” said Holland. “There aren’t many of them coming up on the market – there are only three next week in Newmarket. And he’s out of a black-type mare.”

Ballylinch Stud’s young Dubawi stallion New Bay also got in on the act as sire of two of the day’s six-figure lots.

Leading the way was a colt out of Agala, for whom Spirnac Bloodstock signed at €145,000. Sold by Ballylinch Stud on behalf of breeder Max Morris, the colt is the first foal out of his dam, a Lope De Vega relation to Group 2 winner Defoe.

“We really liked him, we thought he was the nicest foal here today,” said spokesman John Rowe. “New Bay is absolutely killing it and he ticked all the boxes. The sire is going in the right direction and this colt is just a king. He had everything; the walk, the physical, great strength. We loved him.”

The colt represents the essence of Ballylinch Stud as a son of New Bay and a Lope De Vega mare, and the stud’s managing director John O’Connor is hopeful that the nick will prove a fruitful one in due course.

“There’s no doubt that when New Bay gets a nice horse, they tend to be eye-catching,” he said. “He has a lot of quality himself. So the New Bay – Lope De Vega nick could be good. One of the best yearlings we had this year was on that cross, he was a lovely yearling who made a lot of money, so I’m hopeful that one day it could be a good nick.”

New Bay was also behind one of the most popular results of the day in a colt out of Tidewalker, who was sold for €140,000 to Timmy Hyde’s Camas Park Stud. The colt was bred by SW Bloodstock and sold by the Hyland family’s Oghill House Stud, which not only bred his dam but also her Group 1-winning brother Marcel. Sadly, Hugh Hyland passed away only six weeks ago.

“My father passed away about six weeks ago and he would’ve loved to have seen that today, so it’s a little bit emotional,” said John Hyland. “We’re going to enjoy it and we’ll raise a glass to my father this evening. This is his legacy and we’re going to continue it on for him and make sure we do him proud.

“The family has been lucky for us because we bred Marcel with my uncle, David. It’s a young family just starting out so please God it’ll bring us a bit of luck. I wish the buyers all the best with him in the future.

“It’s a brilliant result. This is a tremendous colt and from the day he was born we’ve been really fond of him. New Bay has gone from strength to strength and has had a great season, you can see that with his new fee [€75,000], which is well deserved because he’s a phenomenal stallion.”

In a similar vein to New Bay, momentum behind Tally-Ho Stud’s Mehmas continues to rise to the point that the son of Acclamation will command €60,000 next season having opened his career at €12,500. Con Marnane and his daughter Amy have been supporters of the stallion from the start and yesterday they were once again rewarded as the vendor of a colt who realised €145,000, appropriately to Tally-Ho Stud.

A strong colt widely tipped to be one of the stand outs of the day beforehand, he is a half-brother to two winners and was bred by the Marnane family out of the Listed-placed Deportivo mare Azagba.

“It’s brilliant,” said Amy Marnane. “He’s been a cracker since day one and Mehmas is one of the best sires out there. The mare produces a proper horse every time – she was rated 97 herself and was just beaten in a Listed sprint. The team at home have done an amazing job with all the foals.”

Azagba has a yearling filly by Inns Of Court and is back in foal to Starman.

Mehmas’ current crop of foals were bred in the year that the stallion’s fee was increased to €25,000, and he was again to the fore as sire of a colt who realised €115,000 to Lilly Bloodstock and John Rowe. Bred by Tony Killoran and sold through Kildallan Farm, the colt is a brother to this season’s smart two-year-old Mehmar, third in the Marble Hill Stakes for Michael O’Callaghan.

The sale continues tomorrow from 10am. 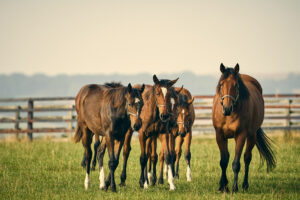 Up Next
Open for business