Wilson Renwick has been forced into pursuing a new career path

Having ridden just shy of 400 winners in the saddle, Wilson Renwick has called time on his career as a jump jockey and will instead pursue a living in professional cycling.

The Hawick-born rider sustained multiple injuries in a first flight fall aboard Donald McCain’s Sindarban in a handicap hurdle at Market Rasen in May 2015.

It was later discovered that he fractured two vertebrae in his neck and had broken his collarbone. Crucially, he also suffered nerve damage in his left arm which has resulted in him hanging up his riding boots as advised by a specialist.

The 36-year-old broke his duck in January 2000 when partnering the mare Gem of Holly to her very first success in a selling handicap hurdle at Sedgefield. Since then, Renwick went on establish himself as one of the top pilots in the north being used by an array of trainers.

“I rode for some great people too many to mention all of them, like Peter Monteith, Lenny Lungo, and Howard Johnson, and loads who are still training – the Dobbins, Donald McCain and Micky Hammond, who has been a great supporter from the very start,” reflected Renwick.

One of his biggest successes came for trainer Peter Niven aboard his stable star Clever Cookie. A high-class dual-purpose performer, he steered the son of Primo Valentino to an eighth-length win in the Grade 2 Premier Kelso Hurdle.

Renwick said: “Clever Cookie was a good horse, I won a Grade 2 on him at Kelso and he was always exciting to ride. Presenting Junior was another that I won seven or eight times on. Striking up relationships with horses like that is a highlight.”

Signed with the Italian-based Parenti Cycling team, the Scot’s focus has very much switched on doing a Victoria Pendleton in reverse and becoming a professional cyclist.

A keen skier too, Renwick is already at ‘elite’ level which is just one tier below professional. His 2016 highlights on two wheels include a win at the Border Trophy 10-mile TT, and second-place finishes at the Cromarty Stage Race and Jack Campbell Memorial Road Race.

He continued: “I took it up a few years ago after I did some stuff at Liverpool University and they said I should give an endurance sport a try as I have a huge lung capacity.

Striking up relationships with horses like that is a highlight

“Endurance athletes do not come into their prime until later in life, so there’s no reason why I should not get a good few years at it.”

With a number of top jockeys on the northern jump circuit having moved to pastures new in recent years, Jason Maguire and Graham Lee two prime examples, the loss of Renwick leaves another gaping hole.

Weighing room colleague Aidan Coleman added on twitter: “All the best in your next venture @WilsonRenwick another top lad gone from the weigh room.” 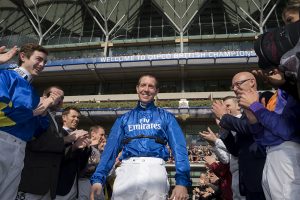 Up Next
Crowley thrilled with jockeys' title