Richard Fahey would score highly in any test of mental agility. He disguises a restless energy as he surveys morning exercise at his Musley Bank Stables, on the north Yorkshire outskirts of Malton. Conversation flows as horses emerge from all points of the compass to gather under the covered ride, yet Fahey’s eye is all-embracing.

As much is quickly obvious. Equine turnover is high at yards like Fahey’s, which has an auxiliary facility at his neighbouring Cherry Tree Farm. More than 200 horses are housed in six separate barns, yet Fahey smiles benignly when you suggest it must be hard keeping tabs on them.

“I know exactly how many horses are here at any one time,” he says. “If you like, I’ll point out every one of them as they gallop past us.”

The offer is rendered redundant by Fahey’s acute observations. In rare silences that punctuate the banter he thinks out loud, delivering vignettes about each and every horse as the 30-strong lot circles the perimeter of an expensive new barn.

The serious horses have already been out. This is fifth lot, “a dollybag mixture” of all ages and different states of readiness for the nascent turf season. Fahey is entitled to the odd mistake, yet the detail he dispenses is far too intimate to call into question.

Besides, to confuse equine identities would be unbecoming of any horse-dealer, never mind one of Fahey’s status. And this is very much a horse-dealer’s enterprise. At the trainer’s side is Robin O’Ryan, his vastly experienced assistant who was finally cajoled from a similar role with Mick  Easterby five years ago. 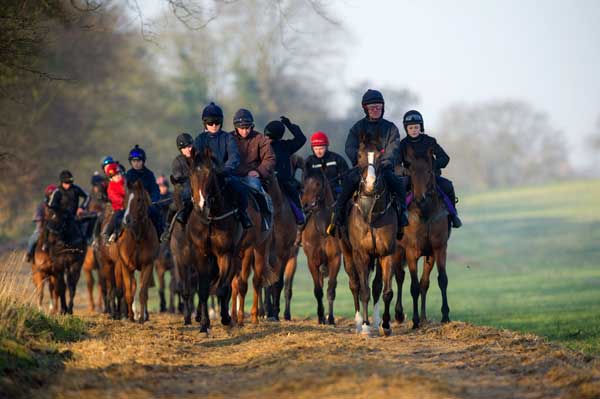 O’Ryan’s eye is just as sharp. He is a cousin of Bobby, whose own eye is much respected as a bloodstock agent. Eyes everywhere. All they have ever done is cast themselves over hundreds of thousands of horses.

Fahey himself shares much in common with Richard Hannon, and not just by their career paths. Both enjoy a laugh and a drink. Both run highly organised outfits and both resemble swans in the contrast of activity above and below the surface. Yet while Hannon is in his professional dotage, Fahey, 45, is full of running.

“It’s never a good idea to take your foot off the gas,” he ventures. “I’d like to train 400 horses, it would mean I’d have a chance of winning every race. This game is about winners. If they dry up, you’re finished.”

There is little prospect of that. Fahey has posted some mind-boggling numbers in recent years. Last season was his best yet: 181 winners earned more than £2 million for the first time. It saw Fahey finish sixth in the trainers’ table, where he was sandwiched between Henry Cecil and Saeed Bin Suroor.

His first century of winners came as recently as 2008, two years after he won prize-money of £1m for the first time. The pivotal season came in 2004, when he broke into the top 20. At that time he was looking for somewhere of his own to train, having operated from a rented Butterwick premises belonging to Peter Easterby, whose daughter, Leila, he married and later separated from – amicably, he says with one eyebrow raised and another benign smile.

That’s what took him to Musley Bank, which he bought from Colin Tinkler six years ago. The 80-acre, 70-box concern required much renovation but Fahey was undeterred. He sank all his profit – and plenty more besides – into a succession of projects which, despite their speed of construction, could barely keep up with demand. Talk of Musley Bank’s ongoing development sees Fahey’s restless streak resurface. He has already spent £350,000 on an all-weather gallop and more than £800,000 on the new barn, but wants to realise all his ambitions in double-quick time.

“Cost-wise, the barn and covered ride ran away with me a bit,” he reflects. I’m trying to save some money because I owe too much to borrow more, but that’s why I have to keep being successful. It’s a good motivator. I need it. I’d say all the building will be finished in another couple of years, but by then I’ll probably have thought of something else.”

The unrelenting pace of Fahey’s progress leaves aspects of Musley Bank trailing in its wake. He points to a section of uneven concrete and says: “Can’t wait to get that levelled off.” And: “Can’t wait to bring down those wooden barns; I truly hate them.” Further: “Can’t get my fillies and geldings out enough every day; I’ll have to buy the field over there – if I can ever afford it.”

Although he doesn’t actually say it, he’s probably counting the days until he can move his racing office out of the Portakabin. In some ways that would be a shame, since the structure is a shrine to Fahey’s career to date. 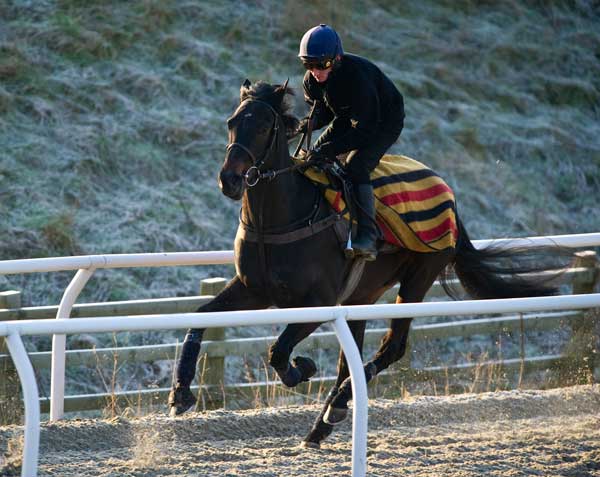 Among several framed photographs, pride of place belongs not to Wootton Bassett’s Prix Jean-Luc Lagardere victory in October but a collection of obscure horses winning at places like Hamilton. These were early, defining moments for Fahey and his staff, who exude a homely feel.

Formal introductions are unnecessary on arrival; you are inundated with requests for coffee, including from Fahey himself, who is busy collating entries for one of the spate of valuable sales races that represent manna from heaven. Everybody chats, smiles and looks you in the eye – although the suspicion is that Fahey could unleash a fair broadside should circumstances demand it.

As for Wootton Bassett, he resides within an American barn, the fictional nameplate on his door lending him an anonymity Fahey hopes will not correspond with achievements this year. The yard’s first Group 1 winner has raised the bar but Fahey guards against expectation, especially over his 2,000 Guineas bid.

“Did you see the picture of Frankel in the newspaper the other day,” he asks? “He’s a monster, an absolute monster.”
Nevertheless, Wootton Bassett has more scope than you’d expect of one so precocious, but then he was never really that in the first place. “He just looked out of the ordinary from the first day he galloped,” Fahey reflects.

The Iffraaj colt was bought for £46,000 by Bobby O’Ryan in 2009. In the same year O’Ryan signed for a son of Medicean which, at 170,000gns, was the most expensive yearling Fahey had yet commandeered – though not for very long. Wootton Bassett’s unbeaten two-year-old campaign brought Fahey further recognition. His recent new intake featured “a handful” costing more than £100,000 and “one or two” beyond that bracket for a new client, Sheikh Mohammed Bin Khalifa Al Maktoum, whose alliance with Mike de Kock is a successful staple of the Dubai carnival.

Fahey struck up a fine rapport with de Kock while holidaying in South Africa. As much is hardly surprising: both are gregarious by nature, run large stables and  are driven to succeed. Yet Fahey plays down his involvement with the Dubaian sheikh. “It’s a bit of pre-training,” he says. “If a horse is any good it will join Mike.”

Modesty is abundant in a man who repeatedly espouses the notion that expensive horses are no harbinger of success. “We made a living out of winning races with cheap horses,” he says. “Spending more on them raises expectations but doesn’t guarantee anything.

“My original owners are good people but with limited budgets, so we needed a new wave with money to spend. We didn’t go looking for them; they came to us, which is how I prefer it. It means they want to be here.”

Perhaps the biggest boon is Fahey can now compete with others who once left him for dead at auctions. “We used to be up against Peter Doyle because we look for the same type of horses,” he recalls. “One year at Doncaster we were underbidder to Peter on 24 horses. We basically came home with the ones he didn’t want, which was a bit frustrating, but we are now more able to compete. We have moved from the bottom tier into the middle tier.”

Just how far he can rise is an intriguing question. Born in Nigeria, the son of an Irish electrician is only just finding his stride. He has come a long way from the aspiring jockey who arrived in Yorkshire on the eve of his 18th birthday and who absorbed much about the business from one of its household names.

“Peter Easterby taught me an awful lot,” Fahey reflects. “I was only his third jockey, but when I started buying and selling horses I went to a lot of sales with him. He is not just a great stockman, but highly intelligent.”

One of the great trainers of his generation, Easterby is Fahey’s neighbour, albeit that it is six miles north-west from Fahey’s patch to Easterby’s home. And Peter’s brother, Mick, owns everything to the south. “Between them they’ve pretty much got North Yorkshire covered,” Fahey smiles.

The best thing about training, he says, is the dream that comes with it. And the way to realise that, he insists, is to build a good team.

“Robin, my assistant, is someone I could never replace,” he says. “I have tried having a pupil but, to be honest, I don’t think anyone could sit well between us.

“And then there’s the staff. There is no doubt in my mind that no yard in England has better work riders than mine.” 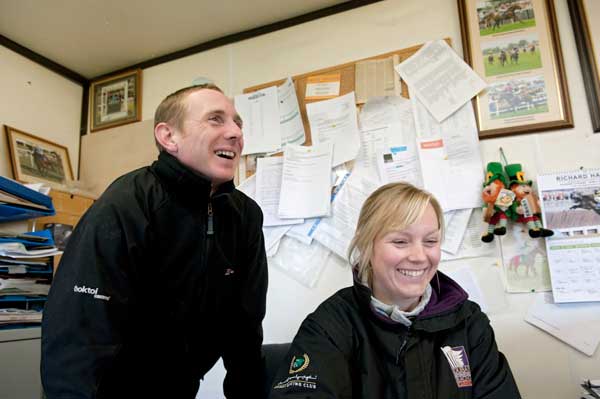 His argument is fortified by the four jockeys attached to the yard, together with three apprentices and an assortment of jumps jockeys who ride out in the summer months.

“We are all in it together,” Fahey stresses. “There are 40 others who muck out and in the afternoon 35 of them go round from barn to barn, brushing the horses. No-one looks after any horse in particular and there are no yard foremen. The camaraderie is great. I would be nowhere without them.”

Fahey deliberately underplays his hand and is loathe to look too far ahead – except in one respect. “In ten years’ time I will be 55,” he says, “and I’ve told Vicki [his wife] that she can train the horses while I put my feet up.”

Richard Hannon used to say exactly the same thing. He is still going strong at 65. 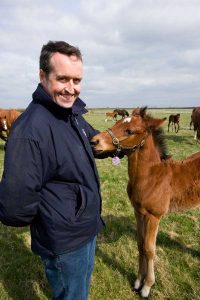 Up Next
The National Stud