The Dubai Fillies’ Mile unearthed the brilliant Minding twelve months ago. She went on to pick up a further four races at the highest level this year.

Her trainer, Aidan O’Brien, has taken all before him this season and only last weekend saddled a remarkable one-two-three in the Qatar Prix de l’Arc de Triomphe at Chantilly.

Unsurprisingly, the Ballydoyle maestro was triumphant once again as his duo of fillies, Rhododendron and Hydrangea, led home a flowery one-two in the one mile contest.

The impeccably-bred Spatial set the pace after two furlongs in the Cheveley Park silks at nothing more than an even pace, with Hydrangea racing away from the others on the stands side with outsider Urban Fox.

With the pace quickening into the final three furlongs, Hydrangea got her head briefly to the front but Rhododendron under Ryan Moore came through with a strong-looking run to challenge down the centre of the track. The latter hit the front with a furlong to go running and cleared away to beat her stablemate by two and a quarter lengths.

The Moore-O’Brien combination has enjoyed nothing short of a remarkable 2016, with their successes at Group 1 level having followed month-on-month right starting at 1,000 Guineas day back in May. For Moore, this victory brings his Group 1 total this season in Britain, Ireland and France to a staggering 15.

“She travelled beautifully into the race and just took me to the front,” reflected Moore. “She’s a filly with a lot of class.

“Aidan’s always held this filly in highest regard and when they get beat you’re a little bit disappointed but they’re still babies but it’s how they finish.”

A daughter of Galileo – who is nearly £6 million clear of his nearest pursuer in the Leading Sires’ list – Rhododendron finished two places behind Hydrangea last time out in the Group 1 Moyglare Stud Stakes at the Curragh. The former reverses that form at her first try at the mile trip and looks destined to return to Newmarket next year.

“It might be it for the year but the lads will talk about that and see what they want to do with themselves.”

The unbeaten daughter of Hellvelyn tracked the early leader Battaash and when asked by jockey Richard Kingscote in the final furlong, kept on well to score by a length-and-a-half.

Martyn Meade was to bag his biggest win of the season as his three-year-old colt Aclaim, took the honours in the Challenge Stakes under Frankie Dettori.

The Mark Johnston-trained Lumiere made a bold bid from the front searching for a first Group 2 prize, but was reeled in by the son of Acclamation inside the final furlong who strode out to score by a length. 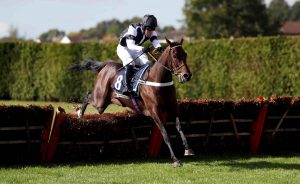 Up Next
New beginning for Hereford