Review of programme for stayers

Present and future projects catch the attention, with an example of each – the BHA’s Plus 10 bonus scheme and the TBA’s review of Britain’s racing programme for stayers – coming into focus with a view to maintaining past achievements for breeders.

The yearling sales season moves to Tattersalls’ Park Paddocks this month with the yearlings of 2014 among the first horses eligible for Plus 10, which will amalgamate the British Owners and Breeders Scheme (BOBIS) and the Racing Post Yearling Bonus Scheme when it is fully operational in 2016, offering £10,000 bonuses across more than 550 races.

Through no fault of DBS – nor the TBA, come to that – August’s yearling catalogues were published without reference to Plus 10 eligibility, although the scheme’s organisers and the sales company did a magnificent job on the ground to make identification available. Thankfully, catalogues for this month’s Tattersalls’ sales highlight Plus 10, and eligibility at the time of going to press is noted on each pedigree page and will be updated on the day.

Take-up for Plus 10 reached more than 3,300 foal and yearling registrations in the first month after its launch in July, and this early foundation should grow stronger as everyone from breeders to buyers acknowledges its value as an attractive financial incentive to new owners to support British- and Irish-bred bloodstock and to race horses locally.

The recipe for Plus 10 recognises the historic and commercial links between the British and Irish bloodstock industries, and streamlines the marketplace as far as racecourse incentive schemes are concerned. The early proof of the pudding will be in the tasting at the yearling sales.

Meanwhile, graduates from the most recent foal and yearling auctions continue to show their worth, and although Australia had his colours lowered in Ireland, there was a satisfactory outcome to the Ladbrokes St Leger for breeders on several counts. Not only are the first four finishers – Kingston Hill, Romsdal, Snow Sky and Windshear – British-bred but three of them changed hands in a British sales ring, while the fourth represented Juddmonte’s powerful operation. And Kingston Hill and Romsdal confirmed their high status gained from being placed in the Derby over the longer distance.

That latter achievement was timely, for the St Leger remains an important touchstone for British stayers and their race programme, about whose possible decline the TBA board has become increasingly concerned. To that end we commissioned Clive Webb-Carter to produce a review into the breeding of and the racing programme available to the stayer in Britain. This has been completed and will be available to TBA members in due course.

Among the findings, none resonated more clearly after the St Leger than this: “With the British breeding industry no longer standing the likes of Halling, Singspiel and Rainbow Quest, there has been little to suggest that these sires have successors.”

Halling is the sire of Romsdal, whose dam is by Singspiel, while Rainbow Quest is the sire of Kingston Hill’s dam, as well as the dam of the latest Park Hill Stakes winner Silk Sari.

We will come back to this subject, given its importance in retaining the all-important variety of British racing, while preserving the gene pool of horses with the soundness to compete over longer distances – the loss of which would result in even the great mile-and-a-half races suffering – and maintaining the number and quality of sires and mares capable of breeding the National Hunt progeny that provide 40% of the British race programme and betting turnover.

For the moment, though, it is worth recounting, as Clive Webb-Carter does in his report, the words of the outstanding breeder and author Federico Tesio: “If we raced ten sprinters against each other in a two-and-a-half-mile race, one is bound to finish first, but this does not make him a stayer.” That observation, from Tesio’s seminal work, Breeding the Racehorse, is as pertinent today as when it was first made nearly 60 years ago. 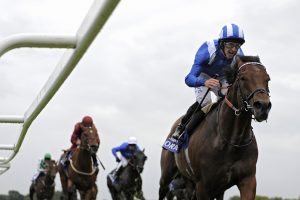 Up Next
Mukhadram to retire to Nunnery Stud