Resilience of bloodstock market on show again at Arqana

Further evidence of the resilience of the bloodstock market was on show during the third session of the Arqana December Sale in Deauville on Monday as the average and median posted increases of 17% and 54% from the corresponding day in 2019.

With a top price of €51,000, paid by Matt Houldsworth for the mare Nafithaa, the general trade was low key. Nevertheless, the metrics pointed to a healthy demand for the middle and lower market offerings, as illustrated by those rises in average and median in addition to a clearance rate of 84%.

The Shamardal mare Nafithaa headed Monday’s trade, selling to Howson and Houldsworth for €57,000 in foal to Intello.

Sold by Haras du Mont di Mont, the four-year-old is out of the Listed-placed Lanansaak and hails from the noted Shadwell family of 1,000 Guineas winner Shadayid. Also working in her favour is the fact she is a sister to the promising Zaajirah, the impressive winner of her debut at Kempton Park for Roger Varian in October.

“She’s a nice, young Shamardal mare,” said Houldsworth, who was working on behalf of an undisclosed client. “She could stay in France.

“It’s a good young family and the two-year-old sister was impressive on debut for Roger Varian.”

It was an old Shadwell family that also supported the second most expensive lot of the day, Thaahira. Marc-Antoine Berghracht of the MAB Agency went to €46,000 to secure the mare, who is the dam of four winners and was sold by Arcadia Elevage in foal to Iffraaj.

By Dynaformer, the 13-year-old is a daughter of Sheikh Hamdan’s 1994 Irish 1,000 Guineas heroine Mehthaaf, also the dam of Group 2 winner Najah, granddam of this year’s Group 1 winner Matterhorn and third dam of top miler Ribchester.

The dearest foal of the day was a colt from the second crop of Haras de Bouquetot’s Group 1-winning miler Al Wukair, who sold for €40,000 in a private sale to Morten Buskop. Sold by Haras de Doumy, the colt is the fourth foal out of multiple scorer Money Time, an Arch half-sister to Listed winner Smart Whip. 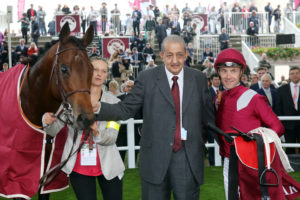