New plan would save racing at the track

Kempton Park devotees will be cheered by today’s news that Jockey Club Racecourses has submitted plans for a small-scale residential development that would allow racing to continue at the Sunbury track.

JCR’s new proposal comes three years after announcing it would consider selling the entire racecourse as part of Spelthorne Borough Council’s drive to build 15,000 homes in the community.

With British racing needing funding to sustain its long-term growth, the Jockey Club’s 2017 plan suggested it could raise £100 million, in partnership with Redrow Homes, by allowing the whole of Kempton Park to be considered for development.

The new option, submitted alongside the original proposal, would only see previously developed land used and Kempton Park would retain all of its current facilities used to host racing.

Sandy Dudgeon, Senior Steward of the Jockey Club, said: “We have respected the position of Spelthorne Borough Council throughout their Local Plan process with relation to Kempton Park.

“Having weighed up the latest information, we have now put forward another option alongside the original full site for their consideration. This would involve just a proportion of the available land there and allow jump and all-weather Flat racing to continue.

“A healthy, sustainable and well-funded sport for the long-term can only be achieved by investing in our sport. The need for British racing to raise significant funding to enable this is perhaps even more vital now when our original proposals were announced.”

Redrow Homes Group Planning Director Julian Larkin added: “The planning representations we have submitted as part of the Local Plan consultation in support of development at Kempton Park emphasis the opportunity that exists to provide high quality new homes in a sustainable location, close to existing transport infrastructure and on previously developed land, in line with National Planning Policy Framework guidelines.

“The new homes would contribute to meeting Spelthorne Borough Council’s identified housing need and help reduce the need to remove land from the Green Belt in less sustainable locations across the borough.

“We look forward to discussing the planning representations with the council and wider community as the Local Plan consultation progresses.” 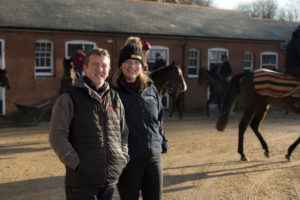 Up Next
Lavelle galloping ahead