Guy Harwood has led the tributes to James Delahooke, who has died at the age of 77.

Delahooke passed away on Wednesday while grouse shooting in Yorkshire with friends.

A renowned horseman with an extraordinary eye for a horse, Delahooke can be credited for laying the foundations of the Juddmonte bloodstock empire, his early purchases on behalf of the late Prince Khalid Abdullah providing the operation with families that would yield Frankel, Enable, Zafonic, Workforce and Dansili.

His partnership with Guy Harwood also illustrated his immense ability to identify a potential athlete. The pair didn’t always have the luxury of large budgets yet proved time and again their ability to seek out value, especially during the late 1970’s and 1980’s when Harwood’s Sussex-based Coombelands Stables housed the likes of To-Agori-Mou, Kalaglow, Ela-Mana-Mou and Young Generation. For instance, Ela-Mana-Mou, a dual Group 1 winner who later became an influential sire, was bought for just 4,500gns. The 1981 2,000 Guineas winner To-Agori-Mou was a 20,000gns purchase while the 1984 King George hero Kalaglow cost just 9,000gns. 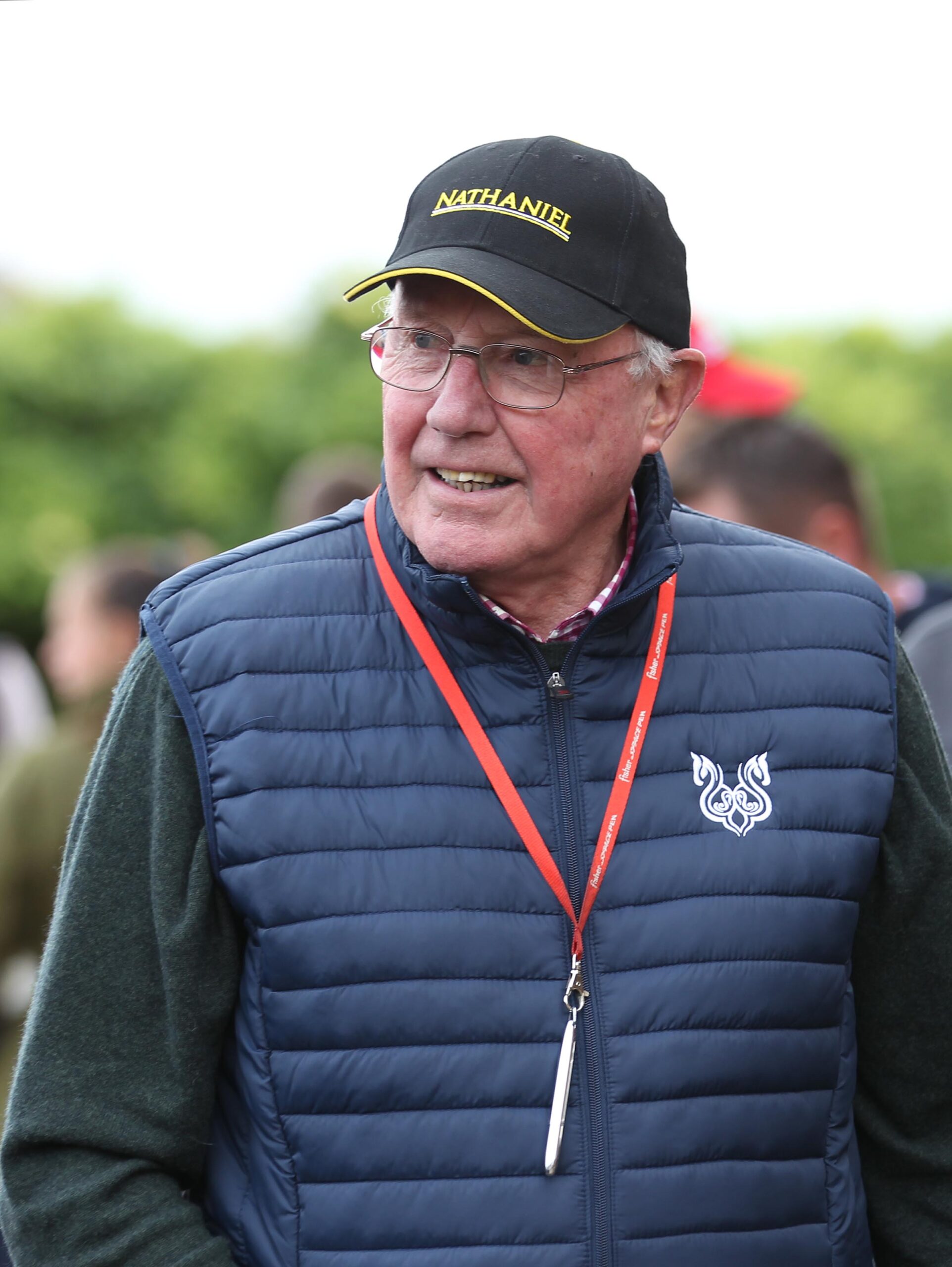 James Delahooke has passed away at the age of 77

“He really was unique,” says Harwood. “Not only did he have a great eye for a racehorse but great knowledge of pedigrees as well. We met in 1973 when a group of five of us set up Stud and Racing Services. The idea was to promote our services to the bloodstock industry and create a stallion syndication. It was well ahead of its time. James was appointed by me to buy the yearlings.

“James was the judge. I also had an opinion but he was the judge and he had a huge knowledge of it all and a wonderful eye for an equine athlete. Ours was a partnership that worked.

“In the early days, it was very much what we could afford as we didn’t have a lot of money. But it was a lot of fun. We started early and worked hard. In those days, we looked at every colt in the catalogue – people would mark up catalogues back then and only look at certain lots. And I think that’s why we bought so many good cheap horses, as we looked at everything.”

The pair were not afraid to search high and low for horses, and if that meant tapping into international bloodlines, so be it. That included making regular trips to Kentucky to source American-bred yearlings. In that they were not alone, but while many of that era travelled with an eye on purchasing at the higher end of the market, Delahooke and Harwood were still working with an eye on value.

“I remember we went to America in the 1970’s,” says Harwood. “We were underbidder about ten times and then managed to buy a colt for $35,000. He was unfashionably bred but very good-looking, and that turned out to be Recitation.”

By Elocutionist, Recitation was saddled by Harwood to win the 1980 Grand Criterium.

“That was the start of our American adventures,” he recalls. “We liked buying out there and bought a huge number of good horses. We bought a lot of high-quality horses by good sires out of some of the lesser sales. In those days, Keeneland would separate the sales – they’d sell in July and September, and often horses were in the second catalogue for one reason or another. But we did very well buying that kind of horse.” 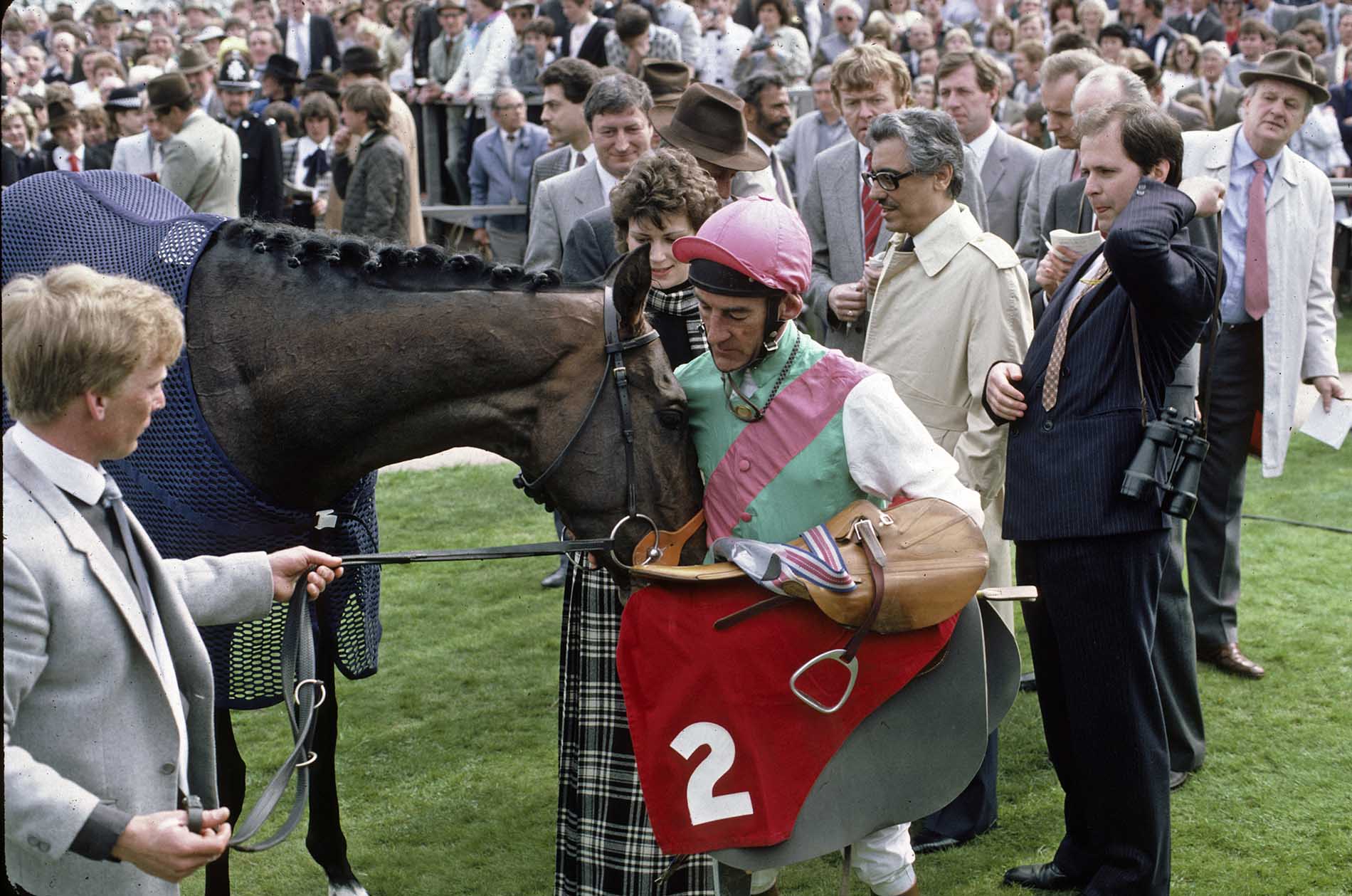 Dancing Brave and jockey Greville Starkey after their win in the 1986 2,000 Guineas – Photo: George Selwyn

Delahooke’s greatest achievement, however, was laying the seeds for Juddmonte’s immense success. Recruited to join Juddmonte in its fledgling years, he went on to secure numerous good horses for the Prince, ranging from the Arc winners Dancing Brave and Rainbow Quest to the top miler Rousillon, Group 1-winning sprinter Dowsing and champion two-year-old Bakharoff. There was also the purchase of a His Majesty filly for ‘just’ $350,000 as a yearling in 1982; subsequently named Razyana, she bred Danehill.

Rainbow Quest, who also won the Coronation Cup for Jeremy Tree, was the sale-topping colt at the 1982 Fasig-Tipton July Sale on a bid of $950,000. Dancing Brave was secured two years later at the same sale for $200,000 – certainly not an expensive figure for a horse who would go on to win the 2,000 Guineas, Eclipse Stakes and King George in addition to the Arc.

In an interview with the Bloodstock Notebook in 2019, Delahooke outlined what had attracted him back then to the son of Lyphard. “He certainly wasn’t perfectly formed,” Delahooke said. “He had a wall eye and a parrot mouth, and was a bit wonky in front. He was an athlete, though, and had very much of what I look for. He was by Lyphard, who as a sire was under a bit of a cloud at the time, and it has always stood me in good stead to ignore it when a proven stallion goes out of fashion. In those days, I had a budget from the Prince (Khalid Abdullah) of $10 million a year for yearlings, and there was no way that this fellow wasn’t going to be part of that year’s package.”

It was one of Delahooke’s ambitions to buy the winner of the Derby, for which Dancing Brave came agonisingly close in 1986. However, few people can boast to have bought both the sires and dams of a winner, and not just once but twice. Delahooke achieved just that, courtesy of the 1990 winner Quest For Fame (by Rainbow Quest and out of Aryenne) and the 1993 hero Commander In Chief (by Dancing Brave and out of Slightly Dangerous).

Both colts were illustrative of the families spawned from some of Delahooke’s purchases, in particular Slightly Dangerous, whose first foal, Warning, had been a brilliant miler for Harwood.

Enable descends from a mare bought as part of a package from Dr Schnapka’s Belair Stud while the Hasili family owes its roots in Sookera, a private purchase off Robert Sangster. “Fortunately at that time Robert was having a divorce and needing funds,” Delahooke recalled in an interview for the Racing Post.

Harwood adds: “One of the things we did was look at the success rates of stallions and we found that good stallions were capable of siring good horses until the day they died. Some people would go ‘oh, that’s by an old stallion’ and not buying them. But we did well buying those.

“Lyphard was good to us and we did very well with Roberto. They went off him but for us, he was the sire of [Group 1-winning miler and successful sire] Lear Fan, who we bought in Newmarket. He was a fine big horse and showed early on in his two-year-old year that he had a lot of ability, as did Rousillon. Dancing Brave was a late May foal so we gave him a bit more time.”

Given his association with Juddmonte, it is easy to forget that for a quarter of a century, Delahooke was also a key cog in the success of Adstock Manor Stud, which stood High Line. A staying son of High Hat, High Line’s first crop consisted of just 14 foals but they included a pair of Group winners and several years later, had two exceptional runners working for him in Master Willie and Shoot A Line, winners of the Benson and Hedges Gold Cup and Yorkshire Oaks during the same afternoon at York in August 1981.

“He fostered a lot of young pupils in the business, of which I was lucky enough to be one  during the days of High Line and Adstock Manor,” says Ted Voute. “David Redvers also did a season the same time I was there, when I went back to manage it.

“James was very direct. He looked after his pupils – he always checked in on them, offered advice, and nurtured a lot of very good people. He was the ultimate stud manager and ran a farm the old fashioned way. He did everything, he also rode and trained point to pointers, and he obviously developed a lot of very good outfits along the way, like Juddmonte and Gerald Leigh.

“He was methodical in everything he did. I think all of us will miss his kind advice and presence at the sales. It’s the end of an era.” 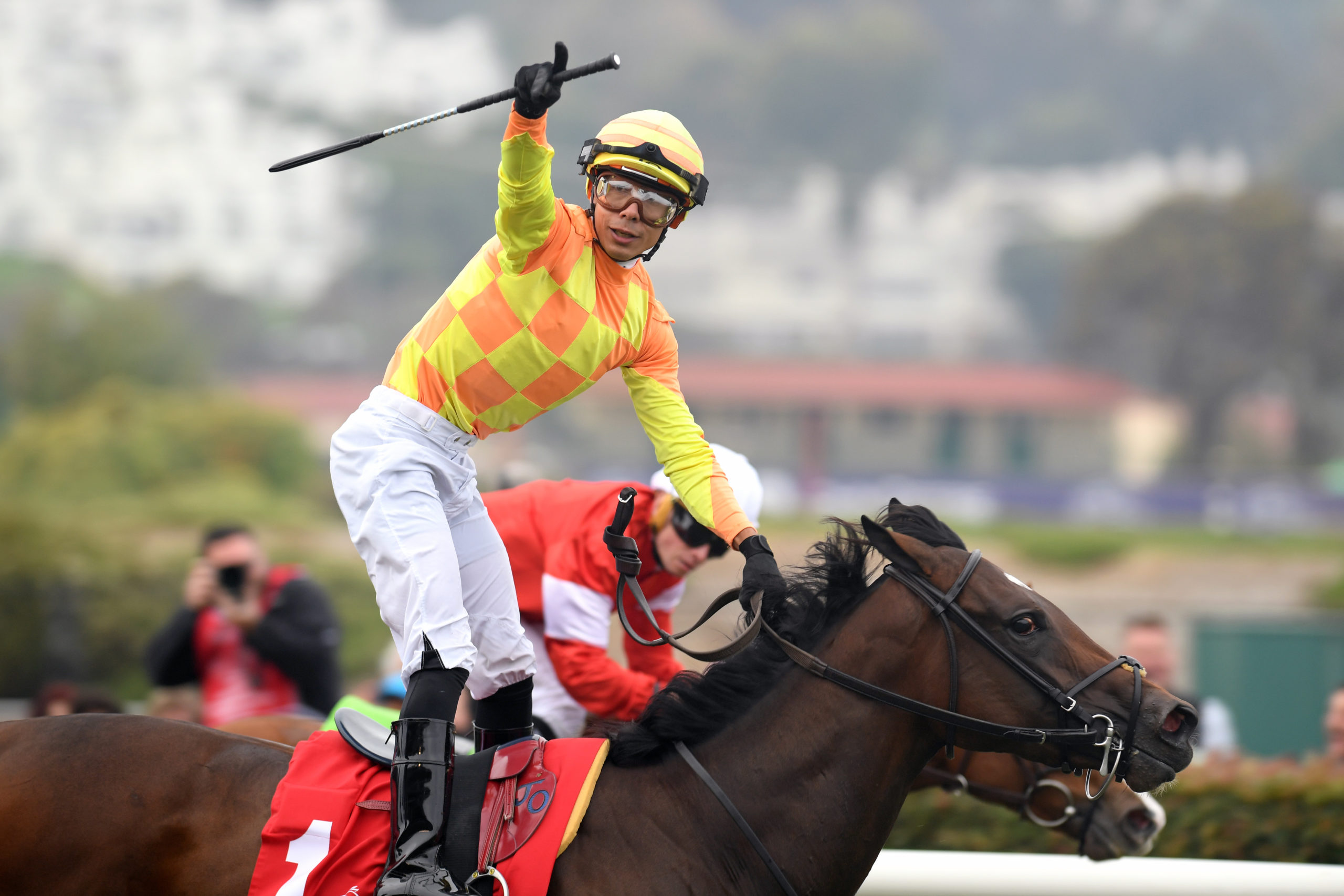 “I first met James when he was a partner in Stud and Racing Services,” recalls Geoffrey Howson, Honorary President of the Federation of Bloodstock Agents. “He and Guy Harwood used to bid and buy so many successful yearlings from the ringside at Tattersalls. In those days, many vendors felt the top accolade was if their yearlings were well received by James and Guy and James was probably the first to ‘work’ the sales paddocks inspections of yearlings in the professional manner in which they are now conducted.

“The subsequent success of both his purchases and management on behalf of Prince Khalid Abdullah and Juddmonte are obviously still evident today, and James was very proud that he had been responsible for buying both the sire and the dam of the 1993 Derby winner, Commander In Chief. His sourcing of the foundation mares for Juddmonte must be one of the outstanding bloodstock successes of the past 50 years.”

He adds: “He was a brilliant judge of yearlings and a man of considerable charm. And I know from personal experience that he imparted his knowledge and encouraged many others within the industry.”

One of his final purchases was the Sioux Nation filly Kinta, bought at this year’s Tattersalls Guineas Breeze-Up. Already Group 3-placed, it would be highly fitting were she to go on to enjoy big-race success.

“I valued my friendship with James for over half a century,” says renowned bloodstock correspondent Tony Morris. “I was privileged to chronicle his many achievements and ultimately to recognise his huge contribution to the future of the breed.  I learnt from him and had the utmost respect for his knowledge.”

Harwood concurs. “He was a great character, forceful, with an opinion and great knowledge. He was deservedly very well respected while he also helped a lot of young people as well.” 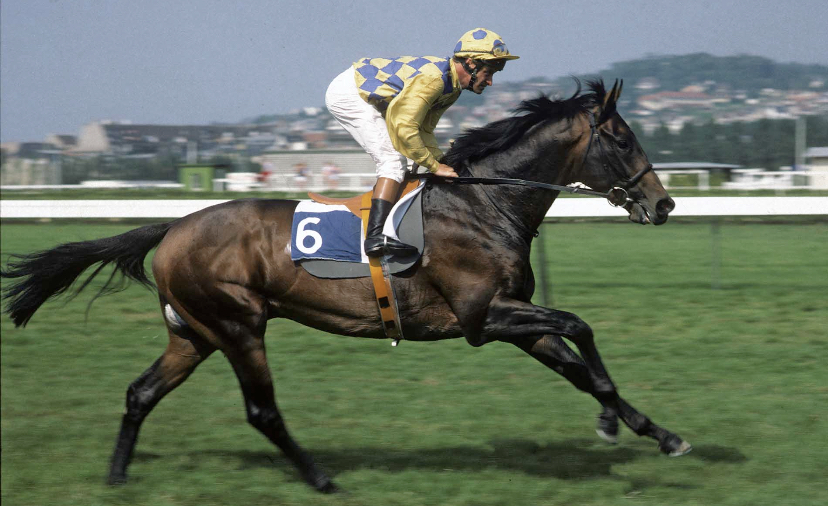 Lear Fan: Prix Jacques les Marois was a son of Roberto, a stallion that James Delahooke and Guy Harwood did very well with. Photo – George Selwyn 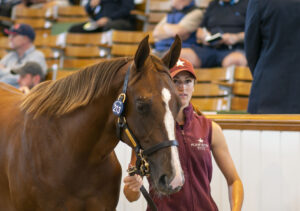 Up Next
Increases across-the-board at Tattersalls Somerville