Karl Burke’s filly added another Group 1 to her bow

By The Owner Breeder staff 03 September 2016

As the forecast rain arrived in it’s droves, the change to soft in the going description began to thin the 32Red Haydock Cup Sprint field out, with ante-post favourite Limato taken out by Henry Candy just hours before the six furlong contest.

The conditions weren’t to prove any inconvenience to the Karl Burke-trained Quiet Reflection, who powered away in impressive fashion to take her second Group 1 of the season.

The 14-strong field were taken along on the stands side rail by Kachy with the likes of Stewards’ Cup heroine Dancing Star and Suedois close to the fore. As plenty of riders were getting busy in the saddle three furlongs out, Quiet Reflection travelled sweetly in mid-division under Dougie Costello.

The former jumps jockey pushed the button just over a furlong out and the daughter of Showcasing quickened a couple of lengths clear of her field inside the furlong pole. She kept on strongly in the run to the line to secure a comfortable length and three quarter victory from runner-up The Tin Man.

Now the fifth three-year-old in the last decade to land the prestigious 6f prize, Quiet Reflection builds on what has already been a lucrative second season.

Her Group 2 Sandy Lane Stakes win over course and distance back in May highlighted her talent and emergence into the top echelon of the sprint division. A month later she justified confidence and claimed her first success at the highest level in the Commonwealth Cup at Royal Ascot, a performance which touched an emotional Costello.

“I’ve never ridden anything like it and I probably never will again,” reflected Costello. “I was probably a little bit fresh to be honest, she’s got there idled a bit and won as she likes.”

For relatively small but upwardly-mobile owners The Ontoawinner Syndicate, the £44,000 outlay to pick up the filly at Goffs April sale at Doncaster last April looks to be reaping dividends.

Quiet Reflection has very much been the flag-bearer for Burke’s Spigot Lodge team, taking the mantle from Odeliz who herself ended her career last season in style when scoring in the Group 1 Premio Longines Lydia Tesio in Italy.

Simon Bridge, winning co-owner said: “We started this syndicate and thought we’d have some nice runners round the small northern tracks.

“To come to the likes of Ascot, Haydock and Newmarket last year with a seriously nice filly like this is fantastic.”

Earlier in the afternoon, the Mark Johnston-trained Frankuus got back to winning ways in The Ascendant Stakes over 1m.

The son of Frankel was last seen finishing last of four in the Washington Singer Stakes at Newbury three weeks ago having previously put up solid back-to-back efforts at Ascot.

Under Franny Norton, the two-year-old colt quickly took his five rivals along from the front and kept on gamely in the final two furlongs to hold runner-up Star Of Rory at bay by three quarters of a length.

Al Shaqab’s familiar grey silks were seen in front where it mattered in The Superior Mile Stakes, courtesy of Hathal trained by William Haggas.

The three-year-old son of Speightstown was making his comeback after nearly a year off the track, but was to make no mistake under Frankie Dettori in adding the Group 3 to his tally.

Hathal picked up the lead within the final furlong and kept on gamely to hold on by a head at the post from challengers Mitchum Swagger and Convey. 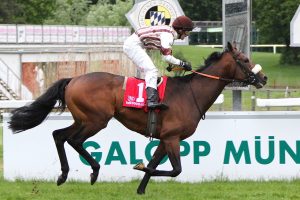 Up Next
Mother teaches boys lesson in Germany