Reflecting on a rewarding term of office

This is my last Chairman’s column so I hope you will permit me to reflect on my key aims and objectives for my term of office. The last five years have seen radical changes in the breeding industry in response to the general economic crisis. The number of British breeders has reduced from in excess of 5,000 to roughly 3,500. TBA membership has also declined, yet the workload has increased significantly as participation in a wider range of industry issues is now required.

The TBA has strengthened its participation in domestic and EU political issues, acquired greater recognition within the racing industry, and representation on the committees which dictate policy. We have expanded our role in veterinary health and staff issues, including training and education, increased support for National Hunt breeders and created a Bloodstock Taxation Committee to protect breeders’ interests. The formation of the Next Generation Committee has been made with an eye to the future. These all represent recent additional areas of support which the TBA now embraces.

In addition, the future of the TBA, both from a financial and legal perspective, has been secured. Supported by a board, which then included two previous Chairmen in Nigel Elwes and Rhydian Morgan-Jones, we recognised the importance of restructuring and, with the members’ consent, the TBA became a limited company with charitable status, thus providing legal and financial reassurance for future trustees and members.

These few words hardly do justice to the considerable time and expense incurred, and I would like to thank all the board members, and especially our Chief Executive Louise Kemble, for their patience and support.

I was elected Chairman in January 2008 and in my first column I proposed closer co-operation with our Irish and continental colleagues on a number of issues, not least our approach to the threat of disease caused by the increased movement of horses. I also made a commitment to work tirelessly to retain the Breeders’ Prizes Scheme and for the industry to tackle overproduction.

With global thoroughbred production now at its lowest in recent history, British racing cannot expect to import horses to meet its requirement. With the prize-money issue still unresolved we fail to have the means to address the reduction in the number of domestic owners. A constant supply of horses and owners can no longer be taken for granted and new incentives to stimulate demand and, therefore, production is needed.

Thankfully the Levy Board continues to recognise the importance of supporting the domestic breeding industry and I am delighted and relieved that the breeders’ prizes have remained in place. We have seen a dramatic decline in funding from £3 million to £700K per annum. I sincerely hope that support for breeders will increase again to a meaningful level in response to the considerable challenges we face.

The TBA board and executive’s sole objective is to work for the benefit of our members and their horses. This has been delivered via support for veterinary health and stud medicine, which is a subject close to my heart. The lifting of the Indian import restrictions on horses exported from the UK was a significant triumph.

A number of veterinary research projects have received funding during my tenure and we have continued to press DEFRA to protect horse health. The latter has been most effective at EU level when supported by the EFTBA members, who were instrumental in gaining additional health checks for horses exported from Romania. I would like to thank the EFTBA and in particular its Chairman, Rhydian Morgan-Jones, who has once again used his diplomatic skills to best effect to forge closer co-operation with Europe.

Finally, I wish my successor, Richard Lancaster, every success and I hope that he thoroughly enjoys the experience awaiting him. 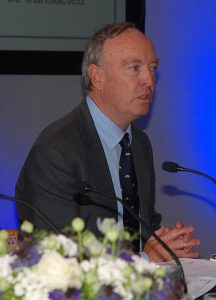 Up Next
Proposals aired for new incentive scheme