Pleasure and pain in the world’s longest horse race

David Redvers and Peter Molony, representing Team Qatar Racing, have managed to complete the course in the eighth renewal of the Mongol Derby. The pair left behind three teammates who were forced to retire as extreme conditions took their toll.

The world’s longest and toughest horse race, this year’s contest saw 40 competitors tackle the 1,000km race for the first time, including the five-strong Team Qatar. On August 4, they lined up alongside horsemen and adventurers from around the world, which included a US Marine Infantry Officer and a New Mexican cowgirl.

A truly unique event, the Mongol Derby recreates Genghis Khan’s ancient messenger system, with the riders acting as the messengers, navigating through the arduous Mongolian landscape on semi-wild, locally sourced horses. Along the way there are 27 horse stations located at 40km intervals, which gives the riders the chance to rest and change their horses, the latter being a compulsory element in the interests of horse welfare.

Once at the station, vets check the heart rate of the horses and if they are not happy, that rider gets a time penalty which means they have to wait until they can get on their next horse, encouraging them to ride more responsibly.

Added to this, the riders are tracked and can only ride between 7am and 7pm, but on average cover around 160km per day. Those with a competitive edge skip some stations to gain ground and set up camp in the exposed and open steppe, with some even being taken in by the locals.

This year’s race has certainly lived up to its billing, as conditions for the riders have been at their worst since the events inauguration in 2008. With conditions of extreme heat and cold in addition to torrential rainfall, there have been many falls and casualties along the way, with three riders ending up in hospital, and 15 having retired, the most in the race’s history.

Darley was among the first of those to retire on day two, after suffering from bad dehydration and knee issues. The former British champion jockey headed to Mongolia to raise money for the Injured Jockeys Fund and is currently Qatar Racing’s International Representative.

No doubt the star attraction was Sheikh Fahad, who last month recorded the biggest success of his career as an amateur rider when landing the historic Newmarket Town Plate. He managed to get to the halfway stage [500km] before retiring due to hip and back problems, but reflected fondly on the race.

“It was an experience I’ll never forget. We had some pretty bad weather – they said worse than usual – and there were some tough times, but it was amazing countryside and a wonderful thing to be a part of,” said Sheikh Fahad.

“If you had told me two years I ago I would be riding wild, virtually unbroken Mongolian ponies across plains and mountains for 500km and sleeping on the ground, I would not have believed you. Everybody fell off more than once and I would have carried on if I could.”

My riding companions were the best fun, but the ponies are the most incredible animals on the planet

However, Redvers continued to make good progress as the race developed, a little way in front of only remaining teammate Molony, son of multiple champion jockey Martin Molony.

After nearly eight days in the saddle and having partnered 27 different horses, Redvers crossed the finishing line in seventh on Thursday afternoon [local time] with two fellow Brits, Alice Newling and Alexandra Hardham. Despite losing plenty of weight and only “half-loving” it, for Redvers this will go down as a true lifetime achievement.

Redvers said: “I can honestly say it’s the most amazing experience of my life. The scenery is beyond anything I can imagine, my riding companions were the best fun, but the ponies are the most incredible animals on the planet.

“To ride a Mongolian pony flat out for 15km here is the closest you get to flying. I am completely and totally emotionally drained but at the same time exhilarated by the experience.” 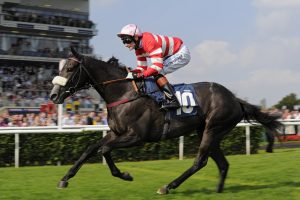 Up Next
Dods' pair set for Nunthorpe assignment