Redoute’s Choice to shuttle to France

The French stallion ranks for 2013 have received a significant boost with the news that that one of Australia’s leading sires, Redoute’s Choice, is to shuttle to the Aga Khan’s Haras de Bonneval in Normandy. He will stand for €70,000 to become the most expensive stallion at stud in France.

Redoute’s Choice, by Danehill, is an exciting reverse-shuttler

The son of Danehill, who was third in the Australian sires’ table for 2011/12 behind Fastnet Rock and Lonhro, has twice been champion sire in Australia, where his best progeny include the muliptle Group 1 winners Miss Finland, Samantha Miss and Gallica. He retired to Arrowfield Stud in the Hunter Valley in 2000 and has been responsible for 89 stakes winners to date.

“We are very excited to have Redoute’s Choice on our stallion roster for 2013 and we will be sending at least 15 of our own mares to him,” said Georges Rimaud, manager of the Aga Khan Studs in France. “In recent years Royal Ascot has proven that the Australian sprinting thoroughbred is comparable with the best in the world.

“Redoute’s Choice is the dominant stallion in Australia and he has already, from limited exposure, sired major winners from mares by stallions such as Kingmambo, Caerleon, Last Tycoon, Rainbow Quest and Nureyev. This is a wonderful opportunity to send northern hemisphere mares to one of the best stallions in the world today, and he will undoubtedly have a strong and lasting impact on the European bloodstock industry.”

Redoute’s Choice, out of the Canny Lad mare Shantha’s Choice, hails from the great Best In Show family, which includes Xaar, Peeping Fawn and the Belmont Stakes-winning half siblings Rags To Riches and Jazil.

The Aga Khan’s breeding operation stands stallions in both France and Ireland, with the Irish roster containing Sea The Stars, whose first yearlings are currently being sold at Arqana’s August Sale in Deauville. 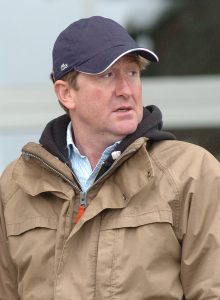 Up Next
European runners excel in Chicago