Among the various stallions to have touched down in Europe from the south this week ahead of the northern hemisphere breeding season, arguably the most exciting arrival is the former champion sire of Australia and New Zealand, Redoute’s Choice.

Now aged 16 (by the southern hemisphere season), it is the first time the outstanding son of Danehill has left his base at Arrowfield Stud in the Hunter Valley since retiring there in 2001. During that time, he has become the most influential son of Danehill at stud in Australia, having been champion first-season sire in 2004 and then champion sire outright in 2006 and 2010. He now has a total of 95 stakes winners to his name.

The Aga Khan announced in August that Redoute’s Choice was to shuttle to his Haras de Bonneval in Normandy and he becomes the most expensive stallion in France by a wide margin. His stud fee has been set at €70,000 (his most recent Australian fee of $137,500 converts to approximately €108,500), while the next dearest among the French ranks is Haras d’Etreham resident Elusive City at €12,500.

Standing at the farm of such a prestigious breeding ouperation, Redoute’s Choice was guaranteed some support from within and thus it was announced this week that 15 of the Aga Khan’s select broodmare band would comprise part of his 100-strong first European book.

He has been paid a very big compliment indeed with the inclusion of the unbeaten Arc winner Zarkava at the head of the list, but she is by no means the only star name. Also committed to him for 2013 are last season’s Yorkshire Oaks and Prix Vermeille heroine Shareta and the Prix Saint-Alary winner Sagawara, from the family of another Arc winner, Sagamix.

Redoute’s Choice will doubtless be one of the star attractions at the forthcoming La Route des Etalons in Normandy, which takes place on February 2 and 3. The FRBC-backed initiative is now in its fourth year and has grown in popularity, with around 30 farms open and 100 stallions on show throughout the weekend. 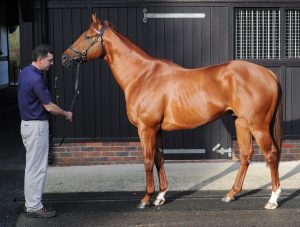 Up Next
Australian shuttle stars arrive