Chelsea Vice-Chairman, Alan Spence has had much to shout about as an owner – with top notchers like Profitable

Even though he has never strayed far from where he was born, Alan Spence has lived a life of many dimensions. The man who was raised in a Kingston council house now dwells in the leafy Esher environs so popular with those of affluence.

Along the way Spence, 69, sold candy floss at Chessington zoo as a teenager. He set up a couple of businesses in Epsom, sold them well and gained entry into the boardroom as a shareholder in Chelsea Football Club, of which he is now Vice-Chairman. He has also owned racehorses for 45 years, during which time he has celebrated more than 300 winners.

The most onerous task confronting Spence in retirement is how to spend his week. He starts by consulting his diary, which contains dates of imminent football fixtures and meetings when any of the 20 horses he has in training might be running.

It’s no wonder he cannot suppress a smile when he says: “Being involved with Chelsea and the horses is a nice life.”

Life has also got a lot better for Spence this year. It has seen the emergence of his Profitable from the ranks of promising sprinters to the fringe of championship honours. True to his self-made roots, he has already cashed in, having sold the horse to Darley under a free lease-back arrangement that will see Profitable carry his colours until the end of the year.

“I’m very pleased with it,” he says. “I have total control over who rides, and which races the horse runs in. I outlined what I wanted to [Darley lynchpin] John Ferguson, he went away, came back less than 30 minutes later and we did the deal. Everybody was happy.”

Profitable’s victory in the King’s Stand Stakes means that Spence is one of only two British owners to have won a Group 1 race in Britain this season. At the time of writing he is suspended between Sheikh Mohammed Obaid and Khalid Abdullah on the owners’ table. And further gains seem likely when Profitable lines up for the Coolmore Nunthorpe Stakes at York.

It was typical of Spence’s sense of adventure that he supplemented Profitable into the six-furlong July Cup. His four-year-old son of Invincible Spirit has plundered three Pattern races this season, all at five furlongs, and while he ran well to finish fourth at Newmarket he will now revert to the minimum trip.

“He certainly got the trip,” Spence relates. “He wasn’t beaten far, but Adam [Kirby] said he couldn’t really hold him up to get the trip. He’s got a very high cruising speed which he can accelerate off, but if he’d used it in the July Cup he’d have been disputing the lead. The race didn’t go right. There’s a difference between racing over five and six furlongs.”

It’s interesting that Spence handled the sale of Profitable himself, rather than deploy a bloodstock agent. But then he’s been handling his own racing interests ever since he bought his first yearling in 1971, when he was 24. In the same year he started Britannic Travel, which he later would sell for a reported £50 million.

Being involved with Chelsea and the horses is a nice life

More immediately, however, his first taste of ownership was electric. “I paid 1,000 guineas for Starch Reduced in October,” he recalls.

“The following May it won first time out by four lengths at Goodwood with Lester Piggott on board. The horse then won again before finishing runner-up at Glorious Goodwood. I guess that’s what got me hooked.”

For the first ten years he never had more than a couple of horses, initially with Arthur Pitt and then with Reg Akehurst, both of whom trained at Epsom, where Spence’s offices were. He could watch his horses galloping in the mornings before settling down to work.

He never found success hard to come by. He had Freight Forwarder with Pitt until Pitt’s retirement, and subsequently with Akehurst. The horse was a prolific winner on the Flat, over hurdles and latterly over fences nearly 40 years ago. The experience led Spence to appreciate both codes.

So much so that he asked Akehurst to buy him horses that could perform on the Flat and over jumps. Among them was Admiral’s Well, bought out of John Gosden’s stable for 18,000gns in 1993.

Having won twice over hurdles soon after his purchase, Akehurst returned the horse to the Flat to finish third behind Double Trigger in the 1995 Gold Cup at Ascot. Admiral’s Well then won the Queen Alexandra Stakes at the Royal meeting 12 months later.

There was also Fact Finder, who was bought to go hurdling but wouldn’t bend his legs on the schooling grounds. Akehurst salvaged the day by saddling the gelding to win the 1989 Lincoln Handicap.

“Reg had a good track record for me,” Spence relates. “He’d buy me a Flat horse in training, quickly school it and bang, bang, bang. I actually prefer the jumps to the Flat, but as one jumps season ends I find myself looking forward to the Flat, and vice-versa.” 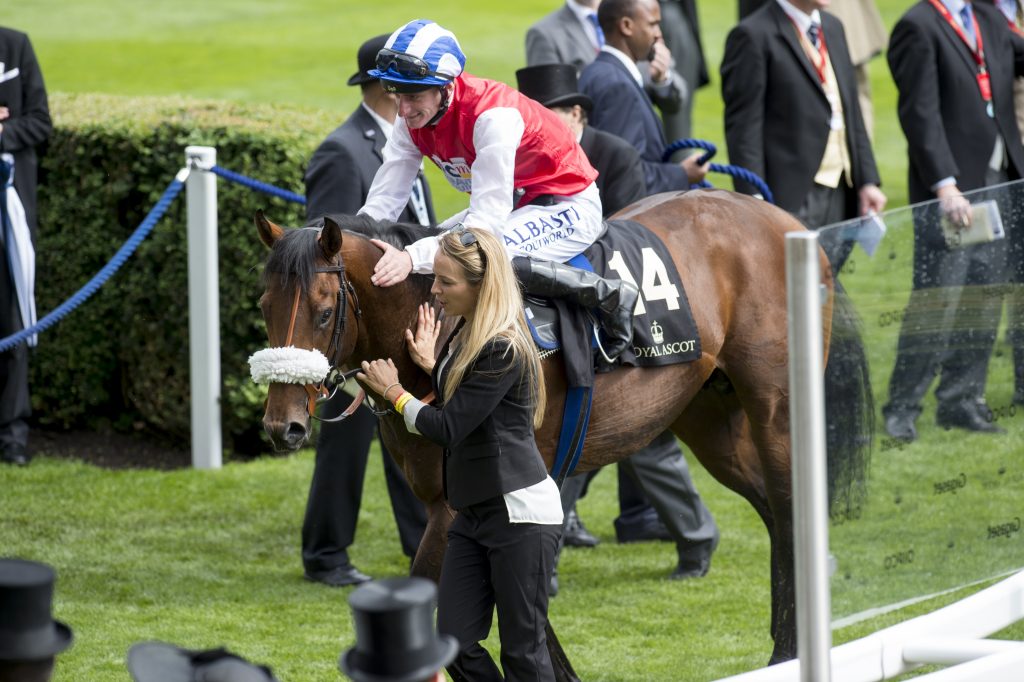 As the years passed Spence gradually upped both his spend on horses and the number he had in training, which resulted in him winning better-quality races. His most talented horse before Profitable was the Mark Johnston-trained Jukebox Jury, the best of whose nine victories came when he dead-heated for the 2011 Irish St Leger.

He was also learning as he went, which prompted him to get involved with aspects like entries and races to target.

“There is an element of luck with horses but I think my involvement helps,” he says. “Trainers are so busy, they have so many horses that they are thinking about everything and anything.

“Sometimes on a Monday the ground is already soft at Haydock and more rain is forecast before Saturday,” he continues. “If you have a fast-ground horse, what’s the point of throwing £300 away in entry fees? So I say, ‘No way’. That’s just wasting money because we’re never going to run. “Trainers do it because they want to have a look, but you have to think before you make the entry. Now my trainers phone me before entering or declaring. From my perspective, being involved makes it more exciting.”

For all that, Spence has been steadfastly loyal. He was with Pitt and Akehurst until their retirements, after which he placed horses with Gerard Butler, Paul Cole, Michael Jarvis, Johnston and Amanda Perrett. He has since added Profitable’s trainer, Clive Cox, to the roster.

Spence says he still supports each of them, yet while they have become friends he maintains the relationship must be established on a professional footing.

“Okay, you have barneys with trainers every now and again but at the end of the day the owner’s still the owner,” he says. “The owner hires the trainer, so if you want something done it needs to be remembered you are the supplier.”

Since Spence owns horses for fun, he tends to stay out of racing politics. However, the self-made, with their inquisitive minds, can’t help but notice ways they feel the ownership experience can be improved. Two in particular animate Spence.

“I think racing is still a bit behind the game,” he says. “For instance, bookmakers sponsor races, they have all this money for sponsorship but as an owner I can’t ask them to put their name on my silks because the BHA won’t allow it. So instead they are putting their names on the shirts of football teams. That’s plain stupid.

“The other thing I don’t like is that races that were once £50,000-added have become £50,000 guaranteed. In the past, the stake money was added on but now racecourses just keep the money, which adds up to quite a lot.”

Despite nearly half a century as an owner Spence has yet to race a homebred. But that is about to change. Part of the deal involving Profitable’s sale was Spence’s retention of “several breeding rights”, some of which he intends to utilise.

“I’ve got a Street Cry mare which I share with a good friend and Hint Of Pink, an unraced filly, who I’ll probably put to Profitable next year,” he says. “I’ve also got Priceless, a three-year-old. She was second in a handicap at the July meeting but she might stay in training for another year.”

The owner hires the trainer, so if you want something done it needs to be remembered you are the supplier

He has never previously had the inclination to breed his own but Profitable has put a different perspective on it.

“I haven’t got into breeding because it’s too long-winded for my liking,” he says. “I like to buy and sell, but having these nominations makes me much more motivated to breed some horses with them. I like the fact I will still be involved with Profitable when he goes to stud.

“It could really pay off if he does well, and it was important to me that I can go and see the horse at his new home rather than seeing him sold abroad, as Jukebox Jury was to Germany.

“That’s why the sale to Darley made me happy. I wasn’t interested in talking to anyone who wouldn’t let me run the horse in my colours for the rest of the season. A really good one’s been a long time coming and I want to enjoy it.

“Other people have said to me I should have waited instead of selling the horse before Royal Ascot. To me, that’s plain greedy. I got a good price, and his win at Ascot enhanced the value of the deal, so I really like where I am with it.”

Some people just have the knack. Spence has made one fortune from business and now puts a smaller one in the bank which will cover the cost of him racing horses for a while yet.

He smiles again and says: “It’s not a bad sort of game when that can happen, is it?” 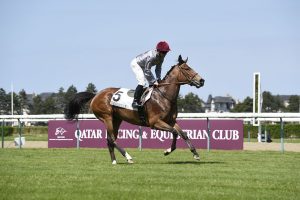