Turnover was up 24% on last year

The record-breaking season at Tattersalls continued unabated at this week’s Autumn Horses In Training Sale, which concluded with the biggest ever turnover of 25,137,100 gns.

With the weak sterling cited as a major factor for the boost in sale demand, Qatari-based trainer Gassim Mohammad Ghazali was amongst the busiest purchasers of the week having taken two of the top four lots.

He stepped in at 450,000 gns to scoop Ralph Beckett’s Pleaseletmewin. The two-year-old colt by Coolmore’s stallion Power, won the Group 3 Horris Hill only last weekend at Newbury.

Ghazali also acquired Cloudberry for 310,000 gns, who was the highlight on day two of the Sale. The son of Pivotal was being offered by Beckhampton House Stables having won all four of his starts this year, his last three coming in handicaps for trainer Roger Charlton.

Harlem, a four-year-old son of Champs Elysees trained in France by Andre Fabre, became the highest priced lot sold since 2010 on day three. He was knocked down to Alastair Donald of SackvilleDonald for a figure of 520,000 gns.

A mile-and-a-half Listed win to his name at three, he was offered as part of the Juddmonte draft. This year he has a Group 2 and Group 3 placing on his form book having also performed creditably in the Group 1 Grand Prix de Saint Cloud behind Silverware back in July.

In addition to record currency exchanged – 24% up on last year – the average and median also both rose substantially. With the median standing at 13,500 gns at the end of the week, this also became a new record, 500 gns more than the previous record set in 2014.

Edmond Mahony, Tattersalls Chairman, stated that he was not surprised to see such frenetic demand at the Sale this year and was particularly impressed by the 90% clearance rate.

Mahony said: “The turnover and median at this week’s sale have both risen to record levels and the average has leapt by around 35%. Even more impressive has been the clearance rate of more than 90%, yet again demonstrating the enduring international appeal of the Tattersalls Autumn Horses in Training Sale.

“Every year we reflect on the extraordinary diversity of buyers, both domestic and overseas, who attend the Autumn Horses in Training, but the sheer number of people here this week has been almost overwhelming.”

He added: “Competition at the top of the market has been particularly fierce with the number of lots making 200,000 guineas or more rising from five last year to twelve this week, but it has been the sustained demand at every level of the market which has been the real feature.” 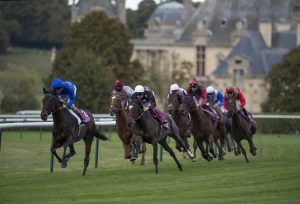